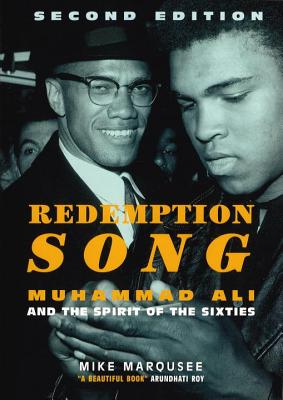 Muhammad Ali and the Spirit of the Sixities

Is there a more characteristic figure of the sixties than Muhammad Ali—playful and political, popular and non-conformist, defiant and triumphant? In a unique new book, Mike Marqusee puts the great boxer back in his true historical context to explore a crucial moment at the cross-roads of popular culture and mass resistance. He traces Ali’s interaction with the evolving black liberation and anti-war movements, including his brief but fascinating liaison with Malcolm X, as well as his encounters with Martin Luther King. Marqusee’s elegant and forceful narrative explores the origins and impact of Ali’s dramatic public stands on race and the draft, and reinterprets the “Rumble in the Jungle,” shedding new light on its triumph and tragedy. Above all, he imbues Ali’s story with a long-neglected international dimension, revealing why he was embraced with such warmth by diverse peoples across the globe.

This timely antidote to the apolitical celebration of Ali as “a great American” revisits the man and the period with a fresh eye, casting new light on both his courage and his confusions. And, in a new afterword for this second edition, Marqusee reflects on Ali’s legacy in the era of the “war on terror.”

Praise For Redemption Song: Muhammad Ali and the Spirit of the Sixities…

“Among the slew of recent Ali books, here’s one that returns the political sting to ‘The Greatest’ ... As Marqusee portrays him, Ali is still the righteous outlaw, as badass as ever and still in the eye of a global storm.”
—Time Out New York

“Fascinating, well-written, entertaining and significant. Redemption Song provides rare and important insights into Muhammad Ali and his immense global impact on a turbulent and ground-breaking era.”
—Leon Gast, co-producer and director of When We Were Kings

“As Marqusee charts how Ali helped create a global consciousness, he succeeds in knocking Ali off the respectable pedestal on which American culture had placed him, resurrecting him as the radical figure he truly was ... a vibrant historical essay.”
—Publishers Weekly

“A thrilling book about a true and enduring hero ... Mike Marqusee has done him, and us, proud.”
—John Pilger

“Excellent ... Reminds us just how explosive and divisive a figure Ali was.”
—Independent on Sunday

Mike Marqusee’s books include Wicked Messenger: Bob Dylan and the 1960s, Redemption Song: Muhammad Ali and the Spirit of the Sixties, War Minus the Shooting, Anyone but England and If I Am Not for Myself. He is a regular contributor to the Guardian and writes a fortnightly column for the Indian newspaper The Hindu. He lives in London.
Loading...
or
Not Currently Available for Direct Purchase