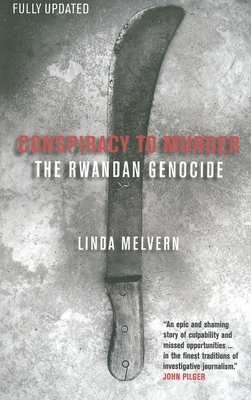 Conspiracy to Murder is a gripping account of the Rwandan genocide, one of the most appalling events of the twentieth century. Linda Melvern’s damning indictment of almost all the key figures and institutions involved amounts to a catalogue of failures that only serves to sharpen the horror of a tragedy that could have been avoided.

Praise For Conspiracy to Murder: The Rwandan Genocide…

“The definitive account of the origins of the [Rwandan] tragedy... Essential. Accessible to all readers.”—Choice

“The best overall account of the background to the genocide, and the failure to prevent it.”—General Romeo Dallaire

“A frank condemnation of the world’s broken promise to ‘never again’ allow genocide to happen.”—UN Chronicle

“A devastating account of the West’s failure to act.”—Magnus Linklater

“An epic and shaming story of culpability and missed opportunities ... in the finest traditions of investigative journalism.”—John Pilger

“A meticulous reconstruction of how the genocide happened.”—New Internationalist

“Melvern’s Book is outstanding ... Her research has been exhaustive and the clarity of her chronology is the most dfamning of all indictments against those who looked the other way in the years leading up to 1994.”—Robert Kirby, Mail & Guardian

Linda Melvern is a widely published investigative journalist. She is an Honorary Fellow of the University of Wales, Aberystwyth, and was a consultant to the Military One prosecution team at the International Criminal Tribunal on Rwanda. Her previous books include The Ultimate Crime and A People Betrayed.
Loading...
or
Not Currently Available for Direct Purchase