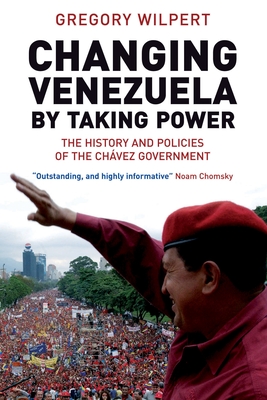 The History and Policies of the Chavez Government

Since coming to power in 1998, the Chavez government has inspired both fierce internal debate and horror amongst Western governments accustomed to counting on an obeisant regime in the oil-rich state. In this rich and resourceful study, Greg Wilpert exposes the self-serving logic behind much middle-class opposition to Venezuela’s elected leader, and explains the real reason for their alarm. He argues that the Chavez government has instituted one of the world’s most progressive constitutions, but warns that they have yet to overcome the dangerous specters of the country’s past.

Praise For Changing Venezuela by Taking Power: The History and Policies of the Chavez Government…

“This fascinating study—deeply informed, penetrating in its analysis, comprehensive in scope—explores the historical and socioeconomic roots of the Venezuelan initiatives of recent years, the conflicts they have engendered, the achievements and pitfalls, the animating ideals of a genuinely participatory society, and the prospects for realizing them in ways that, if successful, might have significant impact not only for Latin America but well beyond.”—Noam Chomsky

“Gregory Wilpert’s book combines academic insight with perspectives gained from living in Venezuela through the tumultuous years of the Chavez administration. His book offers the best general introduction to the complex politics of a country and a leader making a profound impact on global politics at the dawn of this new century.”—Daniel Hellinger

“Greg Wilpert knows Venezuela intimately and gives us the most thorough and objective analysis of the Chavez government’s policies we are likely to find. A thoughtful and useful book for the 21st century and, let us hope, beyond.”—Susan George

“Wilpert presents a detailed, comprehensive and balanced account of the Bolivarian revolution.”—Science & Society

Gregory Wilpert is a sociologist, freelance journalist, and a former US Fulbright Scholar in Venezuela.
Loading...
or
Not Currently Available for Direct Purchase