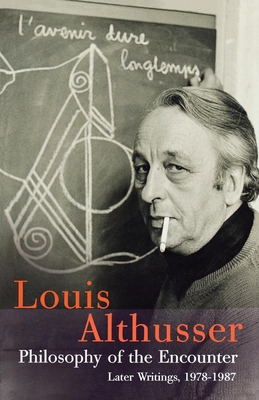 Philosophy of the Encounter

In the late 1970s and 1980s, Louis Althusser endured a period of intense mental instability during which he murdered his wife and was committed to a psychiatric hospital. Spanning this deeply troubling period, this fourth and final volume of political and philosophical writings reveals Althusser wrestling in a creative and unorthodox fashion with a whole series of theoretical problems to produce some of his very finest work. In his profound exploration of questions of determinism and contingency, Althusser developed a “philosophy of the encounter,” which he links to a hidden and subterranean tradition in the history of Western thought which stretches from Epicurus through Spinoza and Machiavelli to Marx, Derrida and Heidegger.

“Althusser traversed so many lives—so many personal, historical, philosophical and political adventures; marked, inflected, influenced so many discourses, actions and existences by the radiant and provocative force of his thought—that the most diverse and contradictory accounts could never exhaust their source.”—Jacques Derrida

Louis Althusser was born in Algeria in 1918 and died in France in 1990. He taught philosophy for many years at the Ecole Normale Superieur in Paris, and was a leading intellectual in the French Communist Party. His books include For Marx; Reading Capital (with Etienne Balibar); Essays in Ideology; Politics and History: Montesquieu, Rousseau, Marx; Machiavelli and Us; and The Spectre of Hegel.
Loading...
or support indie stores by buying on