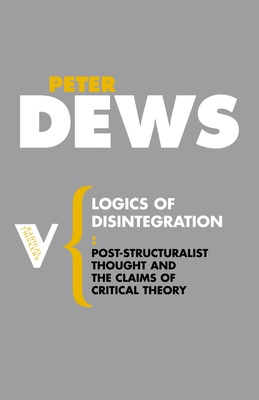 Poststructuralist Thought and the Claims of Critical Theory (Radical Thinkers)

Over the last two decades, contemporary French philosophy has exercised a powerful influence on intellectual life, across both Europe and America. Post-structuralist strategies and concepts have played an important role in many forms of social, cultural and aesthetic analysis, particularly on the Left. Despite the widespread reception, however, there has still been comparatively little analysis of the basic philosophical assumptions of post-structuralism, or of the compatibility of many of its central tenets with the progressive political orientations with which it is frequently associated.

In this book, Peter Dews seeks to remedy this situation by setting post-structuralist thought in relation to another, more explicitly critical, tradition in the philosophical analysis of modernity – that of the Frankfurt School, from Adorno to Habermas. Logics of Disintegration will be of interest to readers across a wide range of disciplines, from literary criticism to social theory, which have felt the impact of post-structuralism – and to anyone who wishes to reach a balanced assessment of one of the most influential intellectual currents of our time.

Praise For Logics of Disintegration: Poststructuralist Thought and the Claims of Critical Theory (Radical Thinkers)…

“This is a fascinating book on many levels ... Dews manages the exceptional feat of being both fair and clear in expounding Derrida, Lacan, Lyotard and Foucault.”—Charles Taylor

Peter Dews is Professor of Philosophy at the University of Essex. He has published widely on contemporary French and German thought, and is the author of The Limits of Disenchantment.
Loading...
or support indie stores by buying on