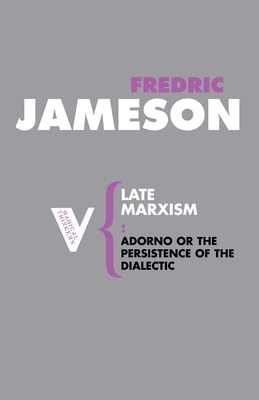 Adorno, Or, The Persistence of the Dialectic (Radical Thinkers)

In the name of an assault on “totalization” and “identity,” a number of contemporary theorists have been busily washing Marxism’s dialectical and utopian projects down the plug-hole of postmodernism and “post-politics.” A case in point is recent interpretation of one of the greatest twentieth-century philosophers, Theodor Adorno. In this powerful book, Fredric Jameson proposes a radically different reading of Adorno’s work, especially of his major works on philosophy and aesthetics: Negative Dialectics and Aesthetic Theory.

Jameson argues persuasively that Adorno’s contribution to the development of Marxism remains unique and indispensable. He shows how Adorno’s work on aesthetics performs deconstructive operations yet is in sharp distinction to the now canonical deconstructive genre of writing. He explores the complexity of Adorno’s very timely affirmation of philosophy — of its possibility after the “end” of grand theory. Above all, he illuminates the subtlety and richness of Adorno’s continuing emphasis on late capitalism as a totality within the very forms of our culture. In its lucidity, Late Marxism echoes the writing of its subject, to whose critical, utopian intelligence Jameson remains faithful.

Praise For Late Marxism: Adorno, Or, The Persistence of the Dialectic (Radical Thinkers)…

“The most philosophically sophisticated and searching study of Theodor Adorno to appear in English ... powerful and persuasive.”—The Nation

“[Jameson is a] prodigiously energetic thinker, whose writings sweep majestically from Sophocles to science fiction.”—Terry Eagleton

Fredric Jameson is Distinguished Professor of Comparative Literature at Duke University. The author of numerous books, he has over the last three decades developed a richly nuanced vision of Western culture’s relation to political economy. He was a recipient of the 2008 Holberg International Memorial Prize. He is the author of many books, including Postmodernism, Or, The Cultural Logic of Late Capitalism, The Cultural Turn, A Singular Modernity, The Modernist Papers, Archaeologies of the Future, Brecht and Method, Ideologies of Theory, Valences of the Dialectic, The Hegel Variations and Representing Capital.
Loading...
or support indie stores by buying on
(This book is on backorder)