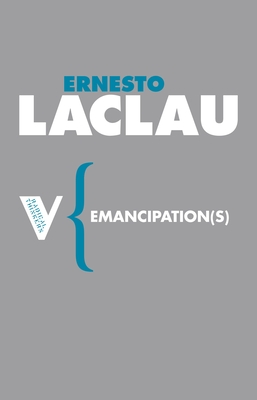 In Emancipation(s), Ernesto Laclau addresses a central question: how have the changes of the last decade, together with the transformation in contemporary thought, altered the classical notion of “emancipation” as formulated since the Enlightenment? Our visions of the future and our expectations of emancipation, have been deeply affected by the changes of recent history: the end of the Cold War, the explosion of new ethnic and national identities, the social fragmentation under late capitalism, and the collapse of universal certainties in philosophy and social and historical thought. Laclau here begins to explore precisely how our visions of emancipation have been recast under these new conditions.

Laclau examines the internal contradictions of the notion of “emancipation” as it emerged from the mainstream of modernity, as well as the relation between universalism and particularism which is inherent in it. He explores the making of political identities and the status of central notions in political theory such as “representation” and “power,” focusing particularly on the work of Derrida and Rorty. Emancipation(s) is a significant contribution to the reshaping of radical political thought.

Ernesto Laclau is Professor of Political Theory in the Department of Government, University of Essex, and Distinguished Professor for Humanities and Rhetorical Studies at Northwestern University. He is the author of, amongst other works, Hegemony and Socialist Strategy (with Chantal Mouffe), New Reflections of the Revolution of Our Time, The Populist Reason, Contingency, Hegemony, Universality (with Judith Butler and Slavoj Zizek), and Emancipation(s).
Loading...
or
Not Currently Available for Direct Purchase