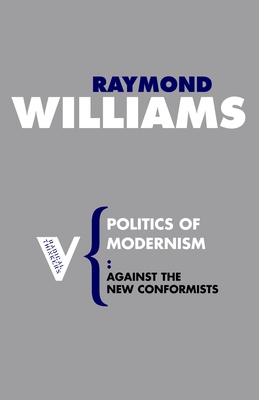 Against the New Conformists (Radical Thinkers)

Considered to be the founding father of British cultural theory, Williams was concerned throughout his life to apply a materialist and socialist analysis to all forms of culture, defined generously and inclusively as “structures of feeling.” In this major work, Williams applies himself to the problem of modernism. Rejecting stereotypes and simplifications, he is especially preoccupied with the ambivalent relationship between revolutionary socialist politics and the artistic avant-garde. Judiciously assessing the strengths and weaknesses of the modernist project, Williams shifts the framework of discussion from merely formal analysis of artistic techniques to one which grounds these cultural expressions in particular social formations. Animating the whole book is the question which Williams poses and brings us significantly closer to answering: namely, what does it mean to develop a cultural analysis that goes ”beyond the modern” and yet avoids the trap of postmodernism’s “new conformism”?

Praise For Politics of Modernism: Against the New Conformists (Radical Thinkers)…

“A toughly analytic mind is fueled by the rich emotional resources of a creative writer.”—Terry Eagleton

Raymond Williams (1921–1988) was for many years Professor of Drama at the University of Cambridge. Among his many books are Culture and Society, Culture and Materialism, Politics and Letters, Problems in Materialism and Culture, and several novels.
Loading...
or support indie stores by buying on