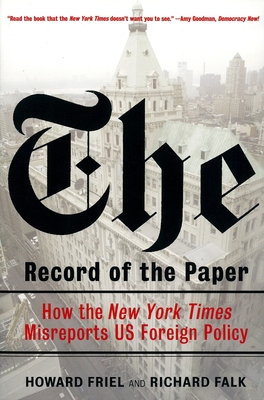 The Record of the Paper

How the New York Times Misreports US Foreign Policy

On May 26, 2004, the New York Times issued an apology for its coverage of Iraq’s purported weapons of mass destruction. The Times had failed to provide what most readers expect from the US newspaper of record: journalistic accuracy and integrity about important matters of US foreign policy.

But the Times’ coverage of Iraq was worse than they were willing to concede. In fact, for at least the past fifty years the editorial policy of the Times—from its coverage of the 1954 Geneva Accords on Vietnam to the issue of torture in Abu Ghraib—has failed to incorporate international law into its coverage of US foreign policy. This lapse, as the authors demonstrate, has profound implications for the quality of the Times’ journalism and the function of the press in a country supposedly governed by the rule of law.

In this meticulously researched study, Howard Friel and Richard Falk reveal how the Times has consistently misreported major US foreign policy issues, including the bombing of North Vietnam in response to the Tonkin Gulf and Pleiku incidents in 1964-65, the Reagan administration’s policy toward the Sandinista government of Nicaragua in the 1980s, the 2002 military coup that briefly overthrew Hugo Chavez, Venezuela’s elected president, and the Bush administration’s 2003 invasion of Iraq.

Praise For The Record of the Paper: How the New York Times Misreports US Foreign Policy…

“There could hardly be a more critical issue today than whether the world will be governed by the rule of law or the unilateral resort to force. This closely argued and penetrating study reviews half a century of increasing contempt for law and preference for force from a dual perspective: US government policy, and ‘journalistic malfeasance with far-reaching implications for constitutionalism in the United States and the rule of law for our country and the world’—no exaggeration, as the authors demonstrate in meticulous detail. The Record of the Paper should be read and pondered carefully, and taken as a call for action by concerned citizens.”—Noam Chomsky

“Friel and Falk provide a thorough and convincing analysis of how the New York Times advocated for the Iraq invasion, avoided dissenting views, ignored global opinion and established fact, and dismissed the relevance of international law. Perhaps most importantly, this book frames the shameful coverage of Iraq within the culture of the New York Times, with its consistent endorsement of US foreign policy from Vietnam to Nicaragua, Venezuela to Iraq. Read this book and join the fight for an independent media.”—Amy Goodman

Howard Friel is author with Richard Falk of The Record of the Paper: How The New York Times Misreports U.S. Foreign Policy (Verso, 2004), and (with Falk) of Israel-Palestine on Record: How The New York Times Misreports Conflict in the Middle East (Verso, 2007). Friel also wrote The Lomborg Deception: Setting the Record Straight about Global Warming (Yale University Press, 2010) and Chomsky and Dershowitz: On Endless War and the End of Civil Liberties (Olive Branch Press, 2014). Friel is the principal author of A Paradigm Shift to Prevent and Treat Alzheimer's Disease: From Monotargeting Pharmaceuticals to Pleiotropic Plant Polyphenols (Elsevier, 2017).

Richard Falk is Albert G. Milbank Professor Emeritus of International Law and Practice at Princeton University, and since 2002 is Visiting Professor of Global Studies at the University of California at Santa Barbara.
Loading...
or
Not Currently Available for Direct Purchase