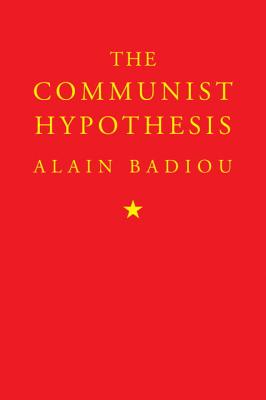 We know that communism is the right hypothesis. All those who abandon this hypothesis immediately resign themselves to the market economy, to parliamentary democracy the form of state suited to capitalism and to the inevitable and natural character of the most monstrous inequalities. Alain Badiou
Alain Badiou's communist hypothesis, first stated in 2008, cut through the cant and compromises of the past twenty years to reconceptualize the Left. The hypothesis is a fresh demand for universal emancipation and a galvanizing call to arms. Anyone concerned with the future of the planet needs to reckon with the ideas outlined within this book.

Alain Badiou teaches philosophy at the Ecole normale superieure and the College international de philosophie in Paris. In addition to several novels, plays and political essays, he has published a number of major philosophical works, including Theory of the Subject, Being and Event, Manifesto for Philosophy, and Gilles Deleuze. His recent books include The Meaning of Sarkozy, Ethics, Metapolitics, Polemics, The Communist Hypothesis, Five Lessons on Wagner, and Wittgenstein s Anti-Philosophy."

Praise For The Communist Hypothesis…

&ldquo;One of the saddest, funniest books of the past 20 years.&rdquo;—John Kappes, Cleveland Plain Dealer