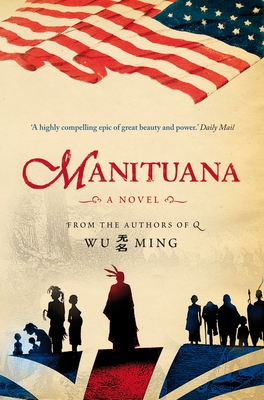 1775—The conflict between the British Empire and the American colonies erupts in all-out war. Rebels and loyalists to the British Crown compete for an alliance with the Six Nations of the Iroquois, the most powerful Indian confederation, boasting a constitution hundreds of years old. In the Mohawk River Valley, Native Americans and colonists have co-existed for generations. But as the thunder of war approaches and the United States struggles violently into existence, old bonds are broken, friends and families are split by betrayal, and this mixed community is riven by hatred and resentment. To save his threatened world, the Mohawk war chief Joseph Brant sets off in a restless journey that will take him from New York to the salons of Georgian London at the heart of the British Empire.

“Their books sizzle with a kind of lefty jazz: they’re linguistically and culturally hip, historically astute, with a heart worn challengingly on the sleeve ... Manituana unspools mesmerizingly like an old Hollywood movie.”—Todd McEwen, Guardian

“A highly compelling epic of great beauty and power.”—Daily Mail

“Manituana shuns anachronism as it sets about delivering a fast-flowing, densely peopled, richly decorated story of s precious way of life, and thought, on the brink of the modern abyss.”—Boyd Tonkin, The Independent

Wu Ming is a collective of five Italian fiction writers, founded in Bologna in January 2000. They co-authored a number of books including 54 and the bestselling novel Q, under the previous pseudonym “Luther Blissett.”

Shaun Whiteside has translated from German works by Freud, Schnitzler, Musil and Nietzsche, and, most recently, The Weekend by Bernhard Schlink (2011). His translation of Magdalena the Sinner by Lilian Faschinger won the 1996 Schlegel-Tieck Award. He lives in London.
Loading...
or
Not Currently Available for Direct Purchase