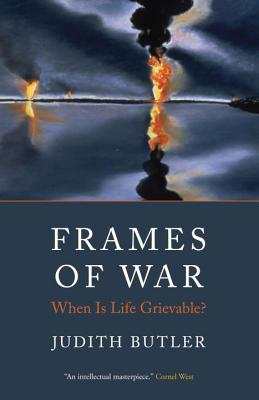 When Is Life Grievable?

In this urgent response to violence, racism and increasingly aggressive methods of coercion, Judith Butler explores the media's portrayal of armed conflict, a process integral to how the West prosecutes its wars. In doing so, she calls for a re-conceptualization of the Left, one united in opposition and resistance to the illegitimate and arbitrary effects of interventionist military action.

Judith Butler is Maxine Elliot Professor in the Departments of Rhetoric and Comparative Literature at the University of California, Berkeley. She is the author of Frames of War, Precarious Life, The Psychic Life of Power, Excitable Speech, Bodies that Matter, Gender Trouble, and with Slavoj Žižek and Ernesto Laclau, Contingency, Hegemony, Universality.

Praise For Frames of War: When Is Life Grievable?…

“It’s clear that its author is still interested in stirring up trouble—academic, political and otherwise.”—Bookforum

“Judith Butler is quite simply one of the most probing, challenging, and influential thinkers of our time.”—J. M. Bernstein

“Judith Butler is the most creative and courageous social theorist writing today. Frames of War is an intellectual masterpiece that weds a new understanding of being, immersed in history, to a novel Left politics that focuses on State violence, war and resistance.”—Cornel West

“An impressive and challenging book from one of the leading intellectuals of our time.”—Diva