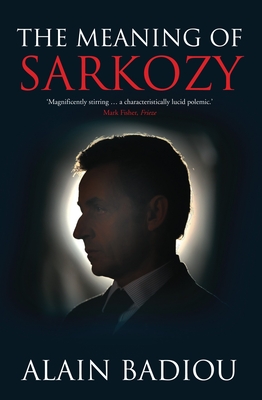 The Meaning of Sarkozy

In this incisive, acerbic work, Alain Badiou looks beyond the petty vulgarity of the French president to decipher the true significance of what he represents—a reactionary tradition that goes back more than a hundred years. To escape the malaise that has enveloped the Left since Sarkozy’s election, Badiou casts aside the slavish worship of electoral democracy and maps out a communist hypothesis that lays the basis for an emancipatory politics of the twenty-first century.

Praise For The Meaning of Sarkozy…

“Magnificently stirring ... a characteristically lucid polemic from a philosopher who is far from willing to abandon humanity to the vicissitudes of so-called global capitalism.”—Mark Fisher, Frieze

“In the tradition of revolutionary pamphleteering.”—Michael Cronin, Irish Times

“Compelling ... He deconstructs, with languid, sarcastic ferocity, the notion that ‘France chose Sarkozy’ ... a very French piece of political venom.”—Rafael Behr, The Observer

Alain Badiou teaches philosophy at the École normale supérieure and the Collège international de philosophie in Paris. In addition to several novels, plays and political essays, he has published a number of major philosophical works, including Theory of the Subject, Being and Event, Manifesto for Philosophy, and Gilles Deleuze. His recent books include The Meaning of Sarkozy, Ethics, Metapolitics, Polemics, The Communist Hypothesis, Five Lessons on Wagner, and Wittgenstein’s Anti-Philosophy.
Loading...
or
Not Currently Available for Direct Purchase