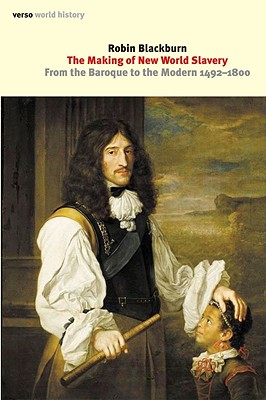 The Making of New World Slavery

The Making of New World Slavery argues that independent commerce, geared to burgeoning consumer markets, was the driving force behind the rise of plantation slavery. The baroque state sought—successfully—to feed upon this commerce and—with markedly less success—to regulate slavery and racial relations. To illustrate this thesis, Blackburn examines the deployment of slaves in the colonial possessions of the Portuguese, the Spanish, the Dutch, the English and the French. Plantation slavery is shown to have emerged from the impulses of civil society, not from the strategies of individual states.

Robin Blackburn argues that the organization of slave plantations placed the West on a destructive path to modernity and that greatly preferable alternatives were both proposed and rejected. Finally, he shows that the surge of Atlantic trade, predicated on the murderous toil of the plantations, made a decisive contribution to both the Industrial Revolution and the rise of the West.

The Verso World History Series: This series provides attractive new editions of classic works of history, making landmark texts available to a new generation of readers. Covering a timespan stretching from Ancient Greece and Rome to the twentieth century, and with a global geographical range, the series will also include thematic volumes providing insights into such topics as the spread of print cultures and the history of money.

“A magnificent work of contemporary scholarship.”—Eric Foner, The Nation

“Sombre, dark and masterly.”—Linda Colley, The Independent on Sunday

Robin Blackburn teaches at the New School in New York and the University of Essex in the UK. He is the author of many books, including "The Making of New World Slavery," "The Overthrow of Colonial Slavery," "Age Shock," "Banking on Death," and "The American Crucible."
Loading...
or
Not Currently Available for Direct Purchase