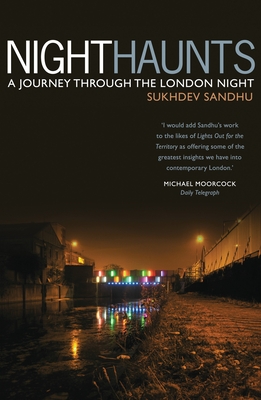 A Journey Through the London Night

Praise For Night Haunts: A Journey Through the London Night…

“Offering some of the greatest insights we have into contemporary London.”
—Michael Moorcock, Daily Telegraph

“A book that restores some mystery and romance to the London night.”
—Times

“Unconventional, poetic and haunting meditation on the capital’s hours of darkness and the largely unregarded men and women who wakefully inhabit it.”
—Observer

“Some of the most ambitious and memorable work of the last decade.”
—Time Out

“Artangel is truly on the side of the angels.”
—Independent

“Sandhu turns his gaze on a side of London many of us blithely pass through regularly; a dirty city with dirty secrets, after dark … Night Haunts is layered and lyrical … an essential though underappreciated contribution to the 2000s psychogeography revival.”
—Johny Pitts, Observer

Sukhdev Sandhu is the author of, among other books, London Calling: How Black and Asian Writers Imagined a City, I’ll Get My Coat, and Night Haunts. He lives in New york and London, and writes for the London Review of Books, Modern Painters and the TLS. He is the award-winning chief film critic of the Daily Telegraph and Associate Professor of English literature at New York University.
Loading...
or
Not Currently Available for Direct Purchase