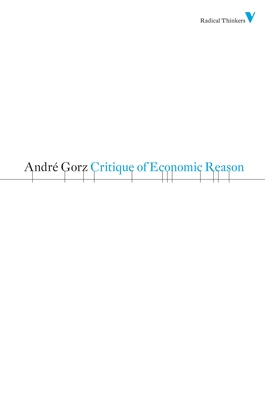 André Gorz’s earlier books—from Ecology as Politics to Farewell to the Working Class and Paths to Paradise—have informed and inspired the most radical currents in Green movements in Europe and America over the last two decades. In Critique of Economic Reason, he offers his fullest account to date of the terminal crisis of a system where every activity and aspiration has been subjected to the rule of the market. By carefully delineating the existential and cultural limits of economic rationality, he emphasizes the urgent need to create a society which rejects the work ethic in favor of an emancipatory ethic of free time.

At the heart of his alternative is an advocacy not of “full employment,” but of an equal distribution of the diminishing amount of necessary paid work. He presents a practical strategy for reducing the working week, and develops a radical version of a guaranteed wage for all. Above all, he argues that a utopian vision is now the only realistic proposal, and that “economic reason must be returned to its true—that is subordinate—place.”

Andre Gorz was born in Austria in 1924, and moved to Paris in 1948, going on to become an editor of Les Temps Modernes. He was one of the founders of Le Nouvel Observateur and wrote for it under the pseudonym of Michel Bosquet for some twenty years. His books Critique of Economic Reason and The Traitor are published by Verso.
Loading...
or support indie stores by buying on
(This book is on backorder)