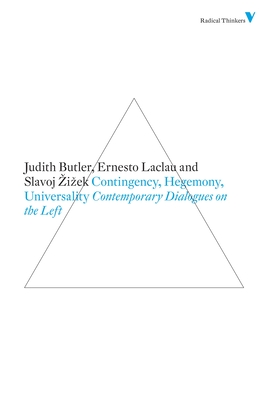 What is the contemporary legacy of Gramsci’s notion of Hegemony? How can universality be reformulated now that its spurious versions have been so thoroughly criticized? In this ground-breaking project, Judith Butler, Ernesto Laclau and Slavoj Žižek engage in a dialogue on central questions of contemporary philosophy and politics. Their essays, organized as separate contributions that respond to one another, range over the Hegelian legacy in contemporary critical theory, the theoretical dilemmas of multiculturalism, the universalism-versus-particularism debate, the strategies of the Left in a globalized economy, and the relative merits of post-structuralism and Lacanian psychoanalysis for a critical social theory. While the rigor and intelligence with which these writers approach their work is formidable, Contingency, Hegemony, Universality benefits additionally from their clear sense of energy and enjoyment in a revealing and often unpredictable exchange.

Ernesto Laclau is Professor of Political Theory in the Department of Government, University of Essex, and Distinguished Professor for Humanities and Rhetorical Studies at Northwestern University. He is the author of, amongst other works, Hegemony and Socialist Strategy (with Chantal Mouffe), New Reflections of the Revolution of Our Time, The Populist Reason, Contingency, Hegemony, Universality (with Judith Butler and Slavoj Zizek), and Emancipation(s).

Judith Butler is Maxine Elliot Professor in the Departments of Rhetoric and Comparative Literature at the University of California, Berkeley. She is the author of Frames of War, Precarious Life, The Psychic Life of Power, Excitable Speech, Bodies that Matter, Gender Trouble, and with Slavoj Žižek and Ernesto Laclau, Contingency, Hegemony, Universality.
Loading...
or
Not Currently Available for Direct Purchase