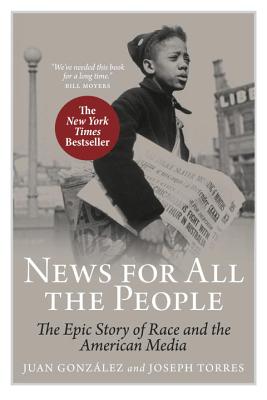 News for All the People

The Epic Story of Race and the American Media

" News for All the People" is a sweeping account of the class and racial conflicts in American news media, from the first colonial newspaper to the internet age. It chronicles key government decisions that created our nation's system of news, major political battles over the role of the press, and the rise of media conglomerates and epoch-defining technologies. The book reveals how racial segregation in the media distorted the news and unearths numerous examples of how publishers and broadcasters actually fomented racial violence through their coverage. And it illuminates how Black, Latino, Asian, and Native American journalists fought to create a vibrant yet little-known alternative and democratic press and then, beginning in the 1970s, forced open the doors of the major media companies.
The writing is fast-paced, story-driven and replete with portraits of individual journalists and media executives, both famous and obscure, the heroes and the villains. It weaves back and forth between the corporate battles and government policies that built our segregated media system as when Commerce Secretary Herbert Hoover gave a radio license to a notorious KKK organization in the nation's capital and those who rebelled against that system, such as Pittsburgh Courier publisher Robert L. Vann, who led a national campaign to get the black-face comedy " Amos n And"y off the air.
"News for All the People" will become the new standard history of American media.


Praise For News for All the People: The Epic Story of Race and the American Media…

“Juan González and Joseph Torres have rendered a splendid public service with this highly readable and engrossing story of how the press sees—and doesn’t see—who we are as a people. Race and ethnicity, power and privilege, the visible and the invisible are at the core of our democratic crisis today, and it’s hard to imagine a better way to face the challenge than to be armed with the story this book tells so well.”—Bill Moyers, Public Affairs Television

“News for All the People is truly a masterpiece; I could not put it down. After years of research, Juan González and Joseph Torres have produced a book that will be nothing short of mandatory reading for all who care about the media or democracy. It will change how you think about media and American history.”—Robert W. McChesney, coauthor of The Death and Life of American Journalism

“A ‘first-of-its-kind’ rendering of the causes, contexts, and consequences of the American media system across the fault line of race. Haunting and prophetic, this is a must-read for all the people.”—Malkia Amala Cyril, executive director of the Center for Media Justice

“With clarity, exquisite detail and strong scholarship, the authors show us how the neglect of the mainstream press over the years still haunts the nation’s identity about who is an American.”—Arlene Notoro Morgan, associate dean at the Columbia Graduate School of Journalism, coeditor of The Authentic Voice: Best Reporting on Race and Ethnicity

“The historic inability of marginalized communities to control their own images has been devastating. News for All the People illustrates that this lack of control hasn’t been by accident. It’s a part of a greater story of media control and ownership that traces back to the creation of the United States. An essential read.”—James Rucker, founder of ColorOfChange.org

“This is journalism history from an entirely fresh perspective, one that challenges the old heroes and shines a sharp light on the role of the media in revealing social inequities in a democratic society.”—Booklist (starred review)

“With vivid detail, González and Torres trace the history of minority journalism in the United States from Colonial newspapers to today’s blogs. This important text should be required reading in journalism schools.”—Donna Marie Smith, Library Journal (starred review)

“When journalists write history, there is always the danger of that history being shallow, surface-level. This remarkable book is one of the rare instances of such a problem being a positive, due to its great, realized ambition. For this narrative successfully weaves the history of Black media, Native American media, Hispanic media and Asian media within the context of the history of America’s capitalistic media development. As 2011 ends, Gonzalez and Torres provide not just a clear understanding of how the enemy built the empire, but merge historical ideas on how to use the new/old tools at our disposal to resist it.”—Dr Todd S Burroughs, Whose Media/Drums in the Global Village

“[This] groundbreaking book takes the reader on a 400-year journey from the past transgressions to today’s democratic crisis, one largely created by the deeds of those controlling the media and the narratives our citizens are actually ‘consuming.’ It delves deeply into why those narratives are slanted, misrepresented or scrubbed altogether by the so-called liberal media.”—Paul K. Haeder, Real Change News

“[O]ffers constant reminders that this conflict has been a true civil war with serious casualties, lasting through many decades and perhaps yet ended. The journalists portrayed here recognized that journalism was a weapon of resistance. If there have been advances, it is in good part because such journalism, bravely wielded, can fight the good fight.”—James Boylan, Columbia Journalism Review

“[T]he discussion of Joe Louis and Jackie Robinson and the press storm that surrounded them will give readers new insights into the world those African American athletes faced. Particularly useful as an introductory resource for those interested in the role the news media played in racial integration. Highly recommended.”—Choice (Current Reviews for Academic Libraries)

Juan Gonzalez is a two-time winner of the George Polk Award for commentary and former president of the National Association of Hispanic Journalists. He is the co-host of the nationally syndicated TV and radio show "Democracy Now!" and is a staff columnist for New York s "Daily News." His previous books include" Harvest of Empire: A History of Latinos in America"; "Fallout: The Environmental Consequences of the World Trade Center Collapse"; and" Roll Down Your Window: Stories from a Forgotten America."" "

Joseph Torres is the senior advisor for government and external affairs for Free Press, the national media reform organization. Before joining Free Press, he worked as deputy director at the National Association of Hispanic Journalists and was a journalist for several years. He lives in Silver Spring, MD."