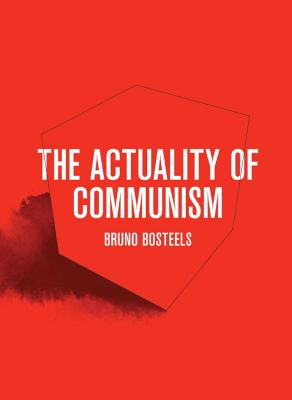 The Actuality of Communism

One of the rising stars of contemporary critical theory, Bruno Bosteels discusses the new currents of thought generated by figures such as Alain Badiou, Jacques Ranciere and Slavoj i ek, who are spearheading the revival of interest in communism. Bosteels examines this resurgence of communist thought through the prism of speculative leftism an incapacity to move beyond lofty abstractions and thoroughly rethink the categories of masses, classes and state. Debating those questions with writers including Roberto Esposito and Alberto Moreiras, Bosteels also provides a vital account of the work of the Bolivian Vice President and thinker Alvaro Garcia Linera.

Praise For The Actuality of Communism…

"The idea of communism is rising from its grave once again—but what does it effectively amount to? Bosteels confronts this issue with no illusions, in a critical dialogue with today’s Leftist thinkers, as well as with radical political practices such those of the Morales government in Bolivia. A beautifully written work which is a must for everyone interested in what’s left of the contemporary Left."—Slavoj Žižek

"The Actuality of Communism is a remarkable achievement. Critically engaging some of the most prominent thinkers in contemporary left political theory, it moves beyond them, resetting the agenda for communism as not only a hypothesis and not only a struggle, but more vitally as the affirmation of the engaged, organized, political movement for emancipation and equality." —Jodi Dean, Theory & Event

"The book does what interventions must, namely draw a line of demarcation, in this case between communism as a real overdetermined process that must engage with the question of power and recent philosophical attempts to resuscitate the term as a pure, invariant kernel of sheer potentiality that exceeds any constitute power or historical actuality--an actuality which always amounts, in this instance, to the questions of state power and of socialism, as a certain modelling and management of the production of social wealth." —Jason E. Smith, Radical Philosophy

Bruno Bosteels, Professor of Romance Studies at Cornell University, is the author of "Badiou and Politics, Marx and Freud in Latin America," and "The Actuality of Communism." He is also the translator of several books by Alain Badiou: "Theory of the Subject, Can Politics Be Thought?" and "What Is Antiphilosophy? Essays on Kierkegaard, Nietzsche, and Lacan." He currently serves as the General Editor of "Diacritics."
Loading...
or
Not Currently Available for Direct Purchase