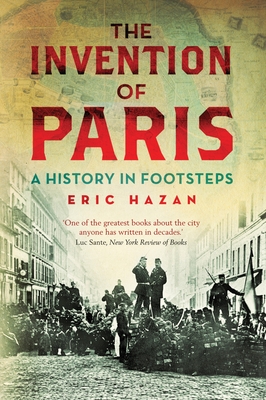 The Invention of Paris

A History in Footsteps

The Invention of Paris is a tour through the streets and history of the French capital under the guidance of radical Parisian author and publisher Eric Hazan.

Hazan reveals a city whose squares echo with the riots, rebellions and revolutions of the nineteenth and twentieth centuries. Combining the raconteur’s ear for a story with a historian’s command of the facts, he introduces an incomparable cast of characters: the literati, the philosophers and the artists—Balzac, Baudelaire, Blanqui, Flaubert, Hugo, Maney, and Proust, of course; but also Doisneau, Nerval and Rousseau.

It is a Paris dyed a deep red in its convictions. It is haunted and vitalized by the history of the barricades, which Hazan retells in rich detail. The Invention of Paris opens a window on the forgotten byways of the capital’s vibrant and bloody past, revealing the city in striking new colors.

Praise For The Invention of Paris: A History in Footsteps…

“[Hazan] stalks the capital, fulminating about the nineteenth and twentieth centuries’ artistic and political rebellions.”—Bookforum

“Detailed, passionate ... Any visit to [Paris] would be made richer by taking the time to read Hazan’s book.”—Angela Meyer, Bookslut

“This is a wondrous book, either to be read at home with a decent map, or carried about sur place through areas no tourists bother with.”—Adam Thorpe, The Guardian

“Hazan is all business. He trudges through Paris street by street, quoting what Balzac, Hugo, Baudelaire or Kafka said about a particular spot, pointing out where barricades were once erected and thieves gathered for drinks.”—Donald Morrison, Financial Times

“Amid the intellectual murkiness of the European scene, a few bright flames are burning: as witness the work of Eric Hazan.”—New Left Review

“[F]ew will be able to resist ... Hazan’s brick-by-brick account of the city’s history of strife and political posturing is riveting.”—Publishers Weekly

“Do you want to be happy? Buy this book and take a stroll.”—Les Inrockuptibles

“Hazan wants to rescue individual moments from general forgetting and key sites from the bland homogenization of international city development; he is also a passionate left-wing historian seeking to rescue the truth of Paris’s revolutionary past.”—Julian Barnes, London Review of Books

“One of the greatest books about the city anyone has written in decades, towering over a crowded field, passionate and lyrical and sweeping and immediate.”—New York Review of Books

“This book is both a political and aesthetic delight, uncovering the real mysteries of Paris.”—Andrew Hussey, author of Paris: The Secret History

“With its astonishing breadth of reference and incredible detail, this is a must for all lovers of Paris.”—Kevin Rushby, author of Paradise: A History of the Idea that Rules the World

Eric Hazan is the founder of the publisher La Fabrique and the author of several books, including Notes on the Occupation and the highly acclaimed The Invention of Paris. He has lived in Paris, France, all his life.
Loading...
or
Not Currently Available for Direct Purchase