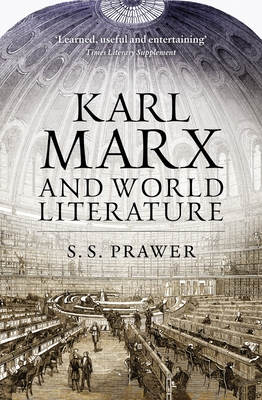 “Very few men,” said Bakunin, “have read as much, and, it may be added, have read as intelligently, as M. Marx.” S. S. Prawer’s highly influential work explores how the world of imaginative literature—poems, novels, plays—infused and shaped Marx’s writings, from his unpublished correspondence, to his pamphlets and major works. In exploring Marx’s use of literary texts, from Aeschylus to Balzac, and the central role of art and literature in the development of his critical vision, Karl Marx and World Literature is a forensic masterpiece of critical analysis.

“Prawer’s book is a milestone: the first important, very well informed and open, non-marxist study in dept of Marx on literature.”—Lee Baxandall, author of Marxism and Aesthetics: A Selective Annotated Bibliography

“Here is a major book on Marx, the imagination of history, and nineteenth-century literary taste, executed with standards of scholarship as rare among Marx’s adherents as among his detractors.”—Bruce Erlich, Prairie Schooner

“By clarifying Marx’s countless allusions not only to the classics of literature but also to more obscure writings, Prawer enhances our understanding and appreciation of Marx’s argument. Since few of us have the remarkable literary range of Marx, Prawer is an invaluable guide through the labyrinth of Marx’s literary metaphor.”—David MacGregor, Contemporary Sociology

“The detail is fascinating and precise. I have discovered only two sources not noted by Professor Prawer, and fear that even these he knows.”—Roy Pascal, translator of The German Ideology by Marx and Engels

“While it is not possible to summarize so richly illustrated a work ... it will no longer be quite so easy for writers on Marx to ignore, glide over, or repress the aesthetic dimension so skillfully evoked by Prawer.”—Theodore Mills Norton, American Political Science Review

“A landmark in comparative literature.”—George Steiner

S. S. Prawer (1925–2012) was Taylor Emeritus Professor of German Language and Literature at the University of Oxford, and a Fellow of Queen’s College, Oxford. His many books include Caligari’s Children, A Cultural Citizen of the World: Sigmund Freud’s Knowledge and Use of British and American Writing, and Karl Marx and World Literature.
Loading...
or
Not Currently Available for Direct Purchase