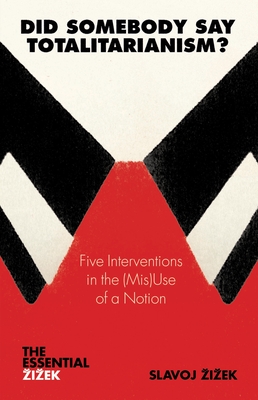 Did Somebody Say Totalitarianism? (Paperback)

In some circles, a nod towards totalitarianism is enough to dismiss any critique of the status quo. Such is the insidiousness of the neo-liberal ideology, argues Slavoj Žižek. Did Somebody Say Totalitarianism? turns a specious rhetorical strategy on its head to identify a network of family resemblances between totalitarianism and modern liberal democracy. Žižek argues that totalitarianism is invariably defined in terms of four things: the Holocaust as the ultimate, diabolical evil; the Stalinist gulag as the alleged truth of the socialist revolutionary project; ethnic and religious fundamentalisms, which are to be fought through multiculturalist tolerance; and the deconstructionist idea that the ultimate root of totalitarianism is the ontological closure of thought. Žižek concludes that the devil lies not so much in the detail but in what enables the very designation totalitarian: the liberal-democratic consensus itself.

Praise For Did Somebody Say Totalitarianism?: 5 Interventions in the (Mis)Use of a Notion (The Essential Zizek)…

“As an alternative to the current post-modernist cult of cynicism and retreat into islands of privacy and nihilism ... the five essays making up Did Somebody Say Totalitarianism? insist on the social link and offer the visionary strength for resistance against all forms of totalized explanations.”—World Literature Today

“This attempt to rethink the conditions of radical political action is one of a number of signs that, after the doldrums of the 1980s and 1990s, left-wing thought is beginning to revive. It will be fascinating to follow where the flood of eloquence and imagination next sweeps Slavoj Žižek.”—Times Literary Supplement

“Žižek is an entertaining writer who would command attention if he were just describing how to mix cement. He wastes no time in tilting at the taken-for-granted ... Žižek wants to find the cracks in the notion of totalitarianism and fill them with dynamite.”—Times Higher Education Supplement
or
Not Currently Available for Direct Purchase
Copyright © 2020 American Booksellers Association