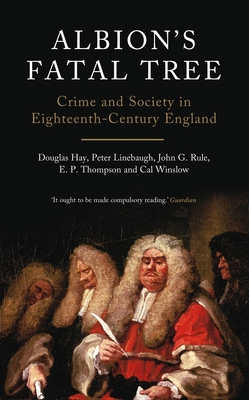 Crime and Society in Eighteenth-Century England

In the popular imagination, informed as it is by Hogarth, Swift, Defoe and Fielding, the eighteenth-century underworld is a place of bawdy knockabout, rife with colourful eccentrics. But the artistic portrayals we have only hint at the dark reality. In this new edition of a classic collection of essays, renowned social historians from Britain and America examine the gangs of criminals who tore apart English society, while a criminal law of unexampled savagery struggled to maintain stability.

Douglas Hay deals with the legal system that maintained the propertied classes, and in another essay shows it in brutal action against poachers; John G. Rule and Cal Winslow tell of smugglers and wreckers, showing how these activities formed a natural part of the life of traditional communities. Together with Peter Linebaugh’s piece on the riots against the surgeons at Tyburn, and E. P. Thompson’s illuminating work on anonymous threatening letters, these essays form a powerful contribution to the study of social tensions at a transformative and vibrant stage in English history.

This new edition includes a new introduction by Winslow, Hay and Linebaugh, reflecting on the turning point in the social history of crime that the book represents.

“Close, meticulous scholarship, imagination, a joyous use of literary and ‘qualitative’ evidence ... and the driving force of commitment make it memorable.”—The Guardian

“Immensely advances our understanding both of Hanoverian England and of the relationship between law and society in general.”—Keith Thomas, author of Religion and the Decline of Magic

“Provocative, full of insights into neglected phases of eighteenth-century social history, and at times profound.”—J. H. Plumb, The Observer

“Erudite ... and elegantly pungent.”—Claud Cockburn, author of Beat the Devil and Aspects of English History

Douglas Hay is Professor in Law and History at York University. His books include Criminal Cases on the Crown Side of King’s Bench 1740–1800.

Peter Linebaugh is Professor of History at the University of Toledo. He writes extensively on British history, Irish history, labor history and the history of the colonial Atlantic. His books include The Magna Carta Manifesto, The Many-Headed Hydra and The London Hanged, and he contributes frequently to CounterPunch.

John G. Rule was Professor of History at the University of Southampton until his retirement. He is the author of Albion’s People.

E. P. Thompson was an English historian whose many books include The Making of the English Working Class.

Cal Winslow is Director of the Mendocino Institute and Fellow in Environmental Politics, Institute of International Studies, UC Berkeley, and co-editor of Rebel Rank and File.
Loading...
or support indie stores by buying on