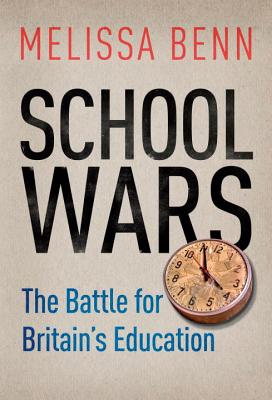 The Battle for Britain's Education

School Wars tells the story of the struggle for Britain’s education system. Established during the 1960s and based on the progressive ideal of good schools for all, the comprehensive system has over the past decades come under sustained attack from successive governments.

From the poorest comprehensives to the most well-resourced independent schools, School Wars takes a forensic look at the inequalities of our current system, the damaging impact of spending cuts, the rise of “free schools” and the growth of the private sector in education. Melissa Benn explores, too, the dangerous example of US education reform, where privatization, punitive accountability and the rise of charter schools have intensified social, economic and ethnic divisions.

The policies of successive British governments have been muddled and confused, but one thing is clear: that the relentless application of market principles signals a fundamental shift from the ideal of quality education as a public good, to education as market-controlled commodity. Benn ends by outlining some key principles for restoring strong educational values within a fair, non-selective public education system.

Praise For School Wars: The Battle for Britain's Education…

“Melissa Benn deserves—demands—to be read. This is a passionate but well made argument for universal public education to promote every child’s chances—not just for them, but for us.”—Will Hutton, author of Them and Us: Changing Britain – Why We Need a Fair Society

“A tremendous book. It is a passionate polemic about the most important policy divide of the day, schooling, the area changing more at the hands of the coalition government than any other.”—Anthony Seldon, Observer

“[A] partisan but surprisingly fair book ... is refreshing, in a debate usually full of denunciations.”—Andy Beckett, Guardian

“A poetically eloquent ... [and] important watershed. It is a clear-sighted re-statement of why universal, comprehensive education is—obviously—the best option. It should, and hopefully will, be taken as a rallying call to the left.”—Phil Beadle, Independent

“Superb, evidence-based history of the educational battleground during the second half of the last century.”—Camden New Journal

Melissa Benn is a journalist, novelist and campaigner. She has written for the "Guardian," the "New Statesman," "Public Finance," "Cosmopolitan" and the "London Review of Books," among many others. Her writing on education includes "Education and Democracy," co-edited with Clyde Chitty, and "A Comprehensive Future: Quality and Equality for All Our Children," written with Fiona Millar. A regular broadcaster and speaker, she is a founder member of the Local Schools Network, set up to support local schools and to counter media misinformation about their achievements and the challenges they face. In spring 2012 she won the Fred and Anne Jarvis award in recognition of her outstanding individual contribution for a fairer education system.
Loading...
or
Not Currently Available for Direct Purchase