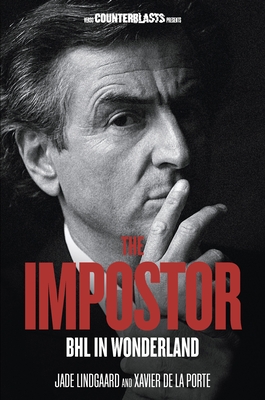 How do we explain what Perry Anderson calls “the bizarre prominence of Bernard-Henri Lévy,” easily the best-known “thinker” under sixty in France? “It would,” he continues, “be difficult to imagine a more extraordinary reversal of national standards of taste and intelligence than the attention accorded this crass booby in France’s public sphere, despite innumerable demonstrations of his inability to get a fact or an idea straight. Could such a grotesque flourish in any other major Western culture today?”

This book, based on a careful investigation comparing BHL’s words with his deeds, seeks to explore the remarkable persistence of this celebrity pseudo-philosopher since he burst onto the scene in 1977. Delving into his networks in the spheres of politics, the media and big business, Lindgaard and de la Porte reveal what the success of this three-decade long imposture tells us about the degeneration of contemporary French intellectual and cultural life.

Praise For The Impostor: BHL in Wonderland (Counterblasts)…

“A familiar figure in the celebrity media, friend of the stars, big bosses and politicians of Left and Right, accompanied or not by Arielle Dombasle, BHL appears, in this effective investigation, as an intellectual with “an oversized ego whose commitments serve his personal interests.” —Agence France Presse

“Cruel enough to be funny, serious enough to be credible ... The angle and method of the two journalists has the merit of simplicity: to take Bernard-Henri Lévy at face value, in other words to read his books, articles, interviews, to watch his films, to listen to his public talks and interventions in the media.” —Télérama

Jade Lindgaard is a journalist for the news site Mediapart, and she coedited La France Invisible, with Stéphane Beaud and Joseph Confavreux (2006).

Xavier de la Porte is a journalist for the radio station France Culture.
Loading...
or
Not Currently Available for Direct Purchase