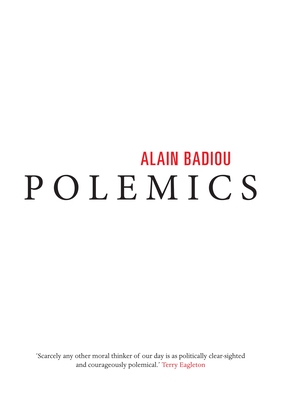 Polemics is a series of brilliant metapolitical reflections, demolishing established opinion and dominant propaganda, and reorienting our understanding of events from the Kosovo and Iraq wars to the Paris Commune and the Cultural Revolution. At once witty and profound, Badiou presents a series of radical philosophical engagements with politics, and questions what constitutes political truth.

“Scarcely any other moral thinker of our day is as politically clear-sighted and courageously polemical, so prepared to put notions of truth and universality back on the agenda.”—Terry Eagleton

“In Polemics, there are withering critiques and witty demolitions of the so-called war on terror, the invasion of Iraq, the bombardment of Serbia and the pantomime of parliamentary democracy ... There is a delightful Swiftian satire on the Islamic headscarf affair and a denunciation of the racism that led to the riots in the banlieues late in 2005.”—Simon Critchley, London Review of Books

“[Badiou’s] argumentative vigour is undeniable. There is a terrific excoriation of the French burka ban as symptomatic of the enforced display of women, a trenchant series of investigations into “Uses of the Word ‘Jew’”, and a “Manifesto of Affirmationist Art” that is a welcome anecdote to lazy anti-modernism.”—Steven Poole, Guardian

Peter Hallward teaches at the Centre for Research in Modern European Philosophy at Kingston University, London. He is the author of several books including Absolutely Postcolonial, Badiou: A Subject to Truth, Out of This World: Deleuze and the Philosophy of Creation, and Damming the Flood.
Loading...
or support indie stores by buying on