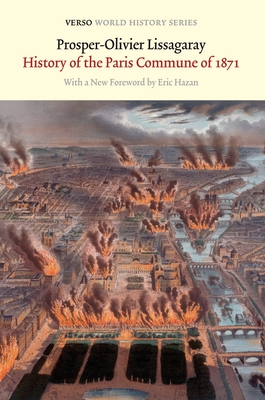 History of the Paris Commune of 1871 (Verso World History Series)

The classic history of the Paris Commune

In 1871, the working class of Paris, incensed by their lack of political power and tired of beingexploited, seized control of the capital. This book is the outstanding history of the Commune, theheroic battles fought in its defence, and the bloody massacre that ended the uprising. Its author,Lissagaray, was a young journalist who not only saw the events recounted here first-hand, butfought for the Commune on the barricades. He spent the next twenty-five years researching andwriting this history, which refutes the slanders levelled at the Communards by the ruling classesand is a vivid and valuable study in urban political revolution, one that retains its power to inspireto this day.

This revised edition includes a foreword by the writer and publisher Eric Hazan.

“Prosper-Olivier Lissigaray, the Paris Commune's greatest historian, a rank-and-file participant in the events, produced a work of rare quality, a political history matched by few others. The tone of the book is fierce, passionate, angry and uncompromising. Its only equivalent is the poetry of Rimbaud.”
—Tariq Ali

“Lissagaray relives the Commune with all the bitterness of a man who could see the tragedy unfold, even as he played his part, dutifully, to the end.”
—Paul Mason, economics editor of the BBC’s Newsnight and author of Why It’s Kicking Off Everywhere

Eric Hazan is the founder of the publisher La Fabrique and the author of several books, including Notes on the Occupation and the highly acclaimed The Invention of Paris. He has lived in Paris, France, all his life.
Loading...
or support indie stores by buying on
(This book is on backorder)