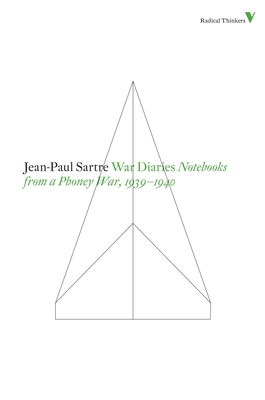 During the phony war that preceded the invasion of France, between late 1939 and the summer of 1940, the young Jean-Paul Sartre was stationed in his native Alsace as part of a meteorological unit. He used his considerable periods of spare time, between mundane duties like watching weather balloons, to make a series of notes on philosophy, literature, politics, history and autobiography that anticipate the themes of his later masterpieces, and often surpass them in literary verve and directness. These War Diaries form a portrait of Sartre in his most intense and brilliant phase. With them the twentieth century’s most remarkable and public philosopher has provided us with a fitting posthumous monument to his honest and creativity.

“Whatever you value in Sartre … the notebooks add substantially to his achievement.”
—The Times

“As a man, philosopher and novelist [Sartre] is … hard to love. And yet love him I do, because of these diaries. They are the story of a mind finding itself, groping about for the theoretical scaffolding on which he would erect his thought.”
—Peter Salmon, Guardian

Jean-Paul Sartre was a prolific philosopher, novelist, public intellectual, biographer, playwright and founder of the journal Les Temps Modernes. Born in Paris in 1905 and died in 1980, Sartre was awarded the Nobel Prize for Literature in 1964—and turned it down. His books include Nausea, Intimacy, The Flies, No Exit, Sartre’s War Diaries, Critique of Dialectical Reason, and the monumental treatise Being and Nothingness.

Quintin Hoare is the director of the Bosnian Institute and has translated numerous works by Sartre, Antonio Gramsci, and other French authors. He lives in the United Kingdom.
Loading...
or
Not Currently Available for Direct Purchase