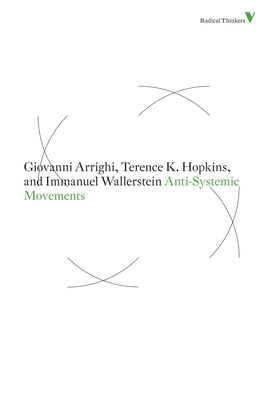 Building on an analysis of the dissenting movements to have emerged since the rise of modern capitalism, Anti-Systemic Movements uncovers an international groundswell of resistance still vitally active at the end of the twentieth century. The authors suggest that the new assertiveness of the South, the development of class struggle in the East and the emergence of rainbow coalitions in various regions hold fresh promise for emancipatory politics. Taking the year 1968 as a symbolic turning point, the authors argue that new anti-systemic movements have arisen which challenge the logic of the capitalist world-system.

Giovanni Arrighi (1937–2009) was Professor of Sociology at Johns Hopkins University. His books include The Long Twentieth Century, Adam Smith in Beijing, and, with Beverly Silver, Chaos and Governance in the Modern World System. His work has appeared in many publications, including New Left Review—who published<a href="http://www.newleftreview.org/?page=article&amp;view=2771"> an interview on his life-long intellectual trajectory</a> in March–April 2009, and <a href="http://www.newleftreview.org/?view=2814">an obituary</a> in Nov–Dec 2009—and there are more accounts on his <a href="http://www.sympathytree.com/giovanniarrighi1937/">memorial website</a>.

Terence K. Hopkins is the author of The Age of Transition and co-author of Anti-Systemic Movements.

Immanuel Wallerstein is director of the Fernand Braudel Center at the State University of New York. His books include a three-volume study, The Modern World-System, Historical Capitalism, and, cowritten with Etienne Balibar, Race, Nation, Class.
Loading...
or
Not Currently Available for Direct Purchase