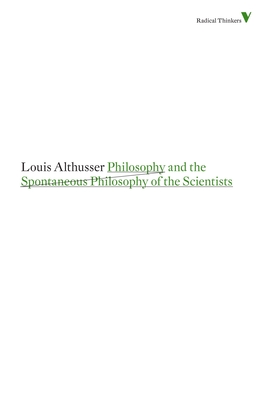 Philosophy and the Spontaneous Philosophy of the Scientists (Radical Thinkers)

The publication in 1965 of For Marx and Reading Capital established Louis Althusser as one of the most original and controversial figures in the Western Marxist tradition; a thinker whose renewal of Marxism was to enjoy great influence over the next decade.

Collected here are Althusser’s most significant philosophical writings from 1965 to 1978; the majority previously untranslated. Intended to contribute, in his own words, to a “left-wing critique of Stalinism that would help put some substance back into the revolutionary project here in the West,” they are the record of a shared history. At the same time they chart Althusser’s critique of the theoretical system unveiled in his own major works, and his developing practice of philosophy as a “revolutionary weapon.”

The collection opens with two lucid early articles—“Theory, Theoretical Practice and Theoretical Formation” and “On Theoretical Work.” The title piece—Althusser’s celebrated lectures in the “Philosophy Course for Scientists”—is the fullest exploration of his new definition of philosophy as politics in the realm of theory; a conception which is further developed in “Lenin and Philosophy.” “Is it Simple to be a Marxist in Philosophy?” provides an invaluable account of Althusser’s intellectual development. The volume concludes with two little-known late pieces—“The Transformation of Philosophy,” in which the paradoxical history of Marxist philosophy is investigated; and “Marxism Today,” a sober balance-sheet of the Marxist tradition.

Attesting to the unique place which Althusser has occupied in modern intellectual history—between a tradition of Marxism which he sought to reconstruct, and a “post-Marxism” which has eclipsed its predecessor—these texts are indispensable reading.

“Louis Althusser influenced so many discourses, actions and existences by the radiant and provocative force of his thought.”—Jacques Derrida (in praise of Louis Althusser)

“One reads him with excitement. There is no mystery about his capacity to inspire the intelligent young.”—Eric Hobsbawm (in praise of Louis Althusser)

Louis Althusser was born in Algeria in 1918 and died in France in 1990. He taught philosophy for many years at the Ecole Normale Superieur in Paris, and was a leading intellectual in the French Communist Party. His books include For Marx; Reading Capital (with Etienne Balibar); Essays in Ideology; Politics and History: Montesquieu, Rousseau, Marx; Machiavelli and Us; and The Spectre of Hegel.
Loading...
or support indie stores by buying on
(This book is on backorder)