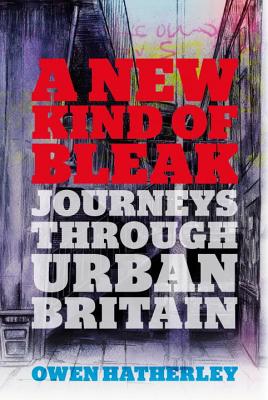 A New Kind of Bleak

In A Guide to the New Ruins of Great Britain, Owen Hatherley skewered New Labour’s architectural legacy in all its witless swagger. Now, in the year of the Diamond Jubilee and the London Olympics, he sets out to describe what the Coalition’s altogether different approach to economic mismanagement and civic irresponsibility is doing to the places where the British live.

In a journey that begins and ends in the capital, Hatherley takes us from Plymouth and Brighton to Belfast and Aberdeen, by way of the eerie urbanism of the Welsh valleys and the much-mocked splendour of modernist Coventry. Everywhere outside the unreal Southeast, the building has stopped in towns and cities, which languish as they wait for the next bout of self-defeating austerity.

Hatherley writes with unrivalled aggression about the disarray of modern Britain, and yet this remains a book about possibilities remembered, about unlikely successes in the midst of seemingly inexorable failure. For as well as trash, ancient and modern, Hatherley finds signs of the hopeful country Britain once was and hints of what it might become.

Praise For A New Kind of Bleak: Journeys through Urban Britain…

“[Hatherley is a] humanely barbed Nikolaus Pevsner for our times ... [His] book should be required reading for planners, developers, and architects.”—Jay Merrick, Independent

“A timely counterpoint to Britain’s jubilee and Olympics self-congratulation ... observed with a precision and fury to force you to open your eyes.”—Ben Felsenburg, Metro

“Engaging, fearless and startlingly intelligent”—Time Out

Owen Hatherley is the author of the acclaimed "Militant Modernism," a defense of the modernist movement, and "A Guide to the New Ruins of Great Britain." He writes regularly on the political aesthetics of architecture, urbanism and popular culture for a variety of publications, including "Building Design," "Frieze," the "Guardian" and the "New Statesman." He blogs on political aesthetics at nastybrutalistandshort.blogspot.com.
Loading...
or
Not Currently Available for Direct Purchase