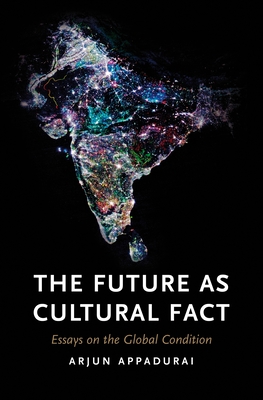 The Future as Cultural Fact (Paperback)

Essays on the Global Condition

This major collection of essays, a sequel to Modernity at Large and Fear of Small Numbers, is the product of ten years’ research and writing, constituting an important contribution to globalization studies. Appadurai takes a broad analytical look at the genealogies of the present era of globalization through essays on violence, commodification, nationalism, terror and materiality.

Alongside a discussion of these wider debates, Appadurai situates India at the heart of his work, offering writing based on firsthand research among urban slum dwellers in Mumbai, in which he examines their struggle to achieve equity, recognition and self-governance in conditions of extreme inequality.

Finally, in his work on design, planning, finance and poverty, Appadurai embraces the “politics of hope” and lays the foundations for a revitalized, and urgent, anthropology of the future.

Arjun Appadurai is Goddard Professor of Media, Culture and Communication at New York University. He is the author of many books and articles, including Modernity at Large: Cultural Dimensions of Globalization; The Social Life of Things: Commodities in Cultural Perspective; and Fear of Small Numbers: An Essay on the Geography of Anger.

Praise For The Future as Cultural Fact: Essays on the Global Condition…

“Arjun Appadurai has fathered yet another intellectually luxuriant book.”—Achille Mbembe, University of Witwatersrand

“Appadurai’s meditations open up foundational questions about culture and economy in the social sciences. Introspective and far-sighted, these insightful essays will consolidate and enhance Appadurai’s reputation as a brilliant contemporary theorist of the present.”—Dipesh Chakrabarty, University of Chicago

“A book for our times. Appadurai outlines the ethics of the future through his own speculative investment in how humans manage uncertainty through crisis-driven markets, turbulent emotions and the careful crafting of versions of the good life. For anyone interested in understanding the spirit of modern capitalism, this is the book to read.”—Henrietta L. Moore, University of Cambridge

“One of the most original thinkers of our global present, Arjun Appadurai shines a brilliant new light on the everyday processes of risk, prediction, design and violence that allow us to partake of urban life from Mumbai to New York. Highly perceptive and deft, this book fulfils the potential in all writing, but realised so rarely, permitting us to see the world anew.”—Faisal Devji, University of Oxford
or
Not Currently Available for Direct Purchase
Copyright © 2020 American Booksellers Association