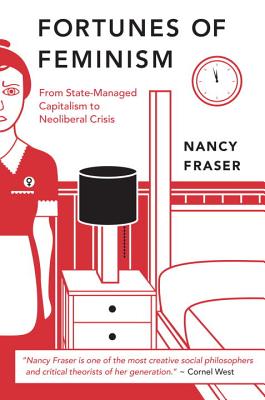 Nancy Fraser’s powerful new book documents the “movements of feminism” and the shifts in the feminist imaginary since the 1970s.

Fraser follows the history of feminism from the ferment of the New Left, during which “Second Wave” feminism emerged as a struggle for women’s liberation alongside other social movements, to its emersion in identity politics following the decline of its initial utopian energies. Alongside this detailed history, Fraser recognizes the need for a reinvigorated feminist radicalism to respond to the crisis in neoliberalism. She argues for a feminism that could join other egalitarian movements in struggles aimed at subjecting capitalism to democratic control, while retrieving the core utopian insights of feminism’s earlier phases.


Praise For Fortunes of Feminism: From State-Managed Capitalism to Neoliberal Crisis…

“Nancy Fraser is among the very few thinkers in the tradition of critical theory who are capable of redeeming its legacy in the twenty-first century.”—Axel Honneth

“For more than a decade, Nancy Fraser’s thought has helped to reframe the agenda of critical theory.”—Etienne Balibar

Nancy Fraser is Loeb Professor of Philosophy and Politics at the New School for Social Research, Einstein Fellow of the city of Berlin, and holder of the "Global Justice" Chair at the College d'etudes mondiales in Paris. Her books include "Redistribution or Recognition"; "Adding Insult to Injury"; "Scales of Justice"; "Justice Interruptus"; and "Unruly Practices."
Loading...
or
Not Currently Available for Direct Purchase