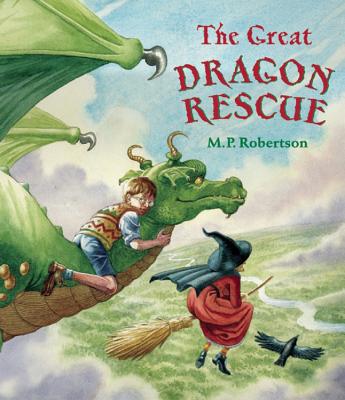 George, the hero from M. P. Robertson's The Egg, has returned in this brand new dragon adventure. George is bored. When it comes to fighting, chickens aren't nearly as much fun as dragons. But when George's dragon returns, he whisks him off to a fairytale land on a rescue mission. A wicked witch has captured a baby dragon and George realises that he must outwit the witch in order to free the dragon and prevent himself from being turned into a toad for the witch's barbecue.


Praise For The Great Dragon Rescue…

M. P. Robertson was born in Parsons Green, London. He studied Graphic Design at Hounslow Borough College, where he discovered a love for illustrated books. After leaving Hounslow he spent a year drawing in museums, cathedrals and on the underground before specialising in illustration at Kingston Polytechnic. Among the influences on his style are Mervyn Peake, Heath Robinson and Odile Redon. He believes that more than merely decorating a book, illustration should be integral to the narrative. Among is books for Frances Lincoln are The Egg, The Great Dragon Rescue and The Dragon Snatcher; Hieronymus Betts and his Unusual Pets, Big Brave Brian, The Sandcastle and Food Chain. He lives in Bradford on Avon with his partner and two sons.
Loading...
or
Not Currently Available for Direct Purchase