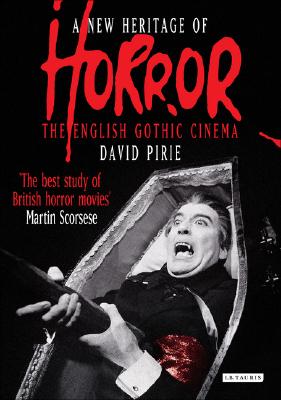 A New Heritage of Horror (Hardcover)

David Pirie's acclaimed 'A Heritage of Horror' was the first book on the British horror movie, and the first to detect and analyse the roots of British horror, identifying it as 'the only staple cinematic myth which Britain can properly claim as its own.' It has long been regarded as a trail-blazing classic, "having the force of a revelation," according to one recent study of the subject, and heralded by Michael Powell and Martin Scorsese.

Now with 'A New Heritage of Horror', David Pirie has revised his original work, bringing the story up to date and into the 21st century. Alongside the classic films of the twentieth century, all explored within the full context of their production and appearance on our screens, he examines the latest horror boom, inaugurated by such films as 'The Others' and '28 Days Later'. He has also uncovered fresh documentation from the original files for this new edition, to add more revelations abuot the history of UK horror and Hammer Films, not least the largely untold story of their desperate battles against censorship. He has further up-dated the original text and added new illustrations. 'The New Heritage of Horror' promises to be one of the key film books of 2008.

David Pirie's books include 'The Vampire Cinema' and 'Anatomy of the Movies'. A former Film Editor of 'Time Out', he's now a successful screenwriter of productions of a gothic or noir flavour, like 'The Woman in White', 'Breaking the Waves' and 'Murder Rooms'

Praise For A New Heritage of Horror: The English Gothic Cinema…

"David Pirie has at last updated his landmark volume…For horror fans, this will be manna from Heaven, for along with Jonathan Rigby’s English Gothic, this remains a cornerstone work, packed with revealing opinion and brow-raising data excavated from the vaults…This highly welcome update will be greeted with open arms by horror devotees who will at last be able to see for themselves what all the fuss has been about." – Howard Maxford, Film Review

"Long been regarded as a trailblazing classic…with A New Heritage of Horror, David Pirie has revised his original work, bringing the story up to date." - Sight & Sound