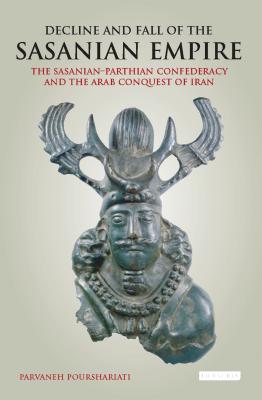 Decline and Fall of the Sasanian Empire

"Decline and Fall of the Sasanians" has already been praised as one of the most intellectually exciting books about ancient Persia to have been published for years. It proposes a convincing contemporary answer to an ages-old mystery and conundrum: why, in the seventh century CE, did the seemingly powerful and secure Sasanian empire of Persia succumb so quickly and disastrously to the all-conquering Arab armies of Islam? Offering an impressive appraisal of the Sasanians' nemesis at the hands of the Arab forces which scythed all before them, the author suggests a bold solution to the enigma. On the face of it, the collapse of the Sasanians - given their strength and imperial power in the earlier part of the century - looks startling and inexplicable. But Professor Pourshariati explains their fall in terms of an earlier corrosion and decline, and as a result of their own internal weaknesses. The decentralised dynastic system of the Sasanian empire, whose backbone was a Sasanian-Parthian alliance, contained the seeds of its own destruction. This confederacy soon became unstable, and its degeneration sealed the fate of a doomed dynasty.

Praise For Decline and Fall of the Sasanian Empire: The Sasanian-Parthian Confederacy and the Arab Conquest of Iran (International Library of Iranian Studies)…

"This is a monumental work of first-class scholarship. Its publication represents a landmark, and it immediately becomes the point of departure for further work on the many subjects it deals with. I can think of few other books I have read over the years that can match this work's astounding combination of originality, bold vision, clarity of presentation, meticulous examination of the sources, and practical puzzle-solving. I learned immensely from reading it. Dr Pourshariati's book is in my view one of the most important individual contributions to our understanding of the history of Iran since Christensen's L'Iran sous les Sassanades, published seventy years ago. Especially remarkable is the breadth of the author's agenda, and the way in which she has convincingly woven together different strands. These include: the political rivalry of the great families, the Sasanians' collapse before Byzantine and Muslim attacks, the religious diversity of medieval Iran, questions of historiography, the substance of the Iranian popular epic, and the important details to be gleaned from seals and other documents. Any one of these would be (and for many scholars has been) a subject for full immersion for many years, but Pourshariati has integrated each into a complex and meaningful whole, even as she has made signal contributions to the more detailed study of each one."--Fred M Donner, Professor of Near Eastern History, University of Chicago

"Both impressive and intellectually exciting, Decline and Fall of the Sasanian Empire is a major, even pathbreaking, work in the field - a field which this book should revolutionize."--Stephen Dale, Professor of History, Ohio State University

"Dr Pourshariati's book proposes a reinterpretation of the structure of the Sasanian Empire and of the power struggle that followed the end of the Byzantine-Persian War of 602-628. The author argues that throughout most of its history the Sasanian state was a confederative structure, in which the north and east (the old Parthian territories of Media and Khurasan) were highly autonomous both politically and culturally. It was Khusraw II's (590-628) disastrous effort to centralize the state that led to its collapse and to the Arab Conquests. Dr Pourshariati also argues for a significant redating of critical moments in the Arab conquests in Iraq. Taken as a whole, Decline and Fall of the Sasanian Empire is original, innovative, bold, and generally persuasive." --Stephen Humphreys, University of California, Santa Barbara "Represents a bold and detailed contribution to the study of Iran in late antiquity, a region hitherto relatively neglected...without doubt a very important and original book, which makes a significant contribution to many aspects of late-antique and early Islamic Iran." -- The Journal of Speculum

Parvaneh Pourshariati is Assistant Professor of Near Eastern Languages and Cultures at Ohio State University. She is the author of many scholarly articles on ancient Iran, and this is her first book.
Loading...
or
Not Currently Available for Direct Purchase