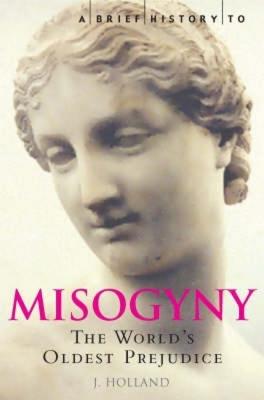 A Brief History of Misogyny (Paperback)

In this compelling, powerful book, highly respected writer and commentator Jack Holland sets out to answer a daunting question: how do you explain the oppression and brutalization of half the world's population by the other half, throughout history?

The result takes the reader on an eye-opening journey through centuries, continents and civilizations as it looks at both historical and contemporary attitudes to women. Encompassing the Church, witch hunts, sexual theory, Nazism and pro-life campaigners, we arrive at today's developing world, where women are increasingly and disproportionately at risk because of radicalised religious belief, famine, war and disease. Well-informed and researched, highly readable and thought-provoking, this is no outmoded feminist polemic: it's a refreshingly straightforward investigation into an ancient, pervasive and enduring injustice. It deals with the fundamentals of human existence -- sex, love, violence -- that have shaped the lives of humans throughout history.

The answer? It's time to recognize that the treatment of women amounts to nothing less than an abuse of human rights on an unthinkable scale. A Brief History of Misogyny is an important and timely book that will make a long-lasting contribution to the efforts to improve those rights throughout the world.

Jack Holland was a highly respected author and journalist known particularly for his commentary about Northern Irish politics. He grew up in Belfast (where he was taught by Seamus Heaney) and worked with Jeremy Paxman and other outstanding journalists at BBC Belfast during a period of seminal current affairs programming. Jack published four novels and seven works of non-fiction, most of the latter having to do with politics and terrorism in Northern Ireland, including the bestselling Phoenix. Sadly, Jack died of cancer in 2004, just after the manuscript of Misogyny had been delivered and accepted by his US publisher. On his death, his family received letters of respect from statesmen including Ted Kennedy and Hilary Clinton, who had come to rely on his balanced analysis of Irish politic.
or support indie stores by buying on
Copyright © 2020 American Booksellers Association