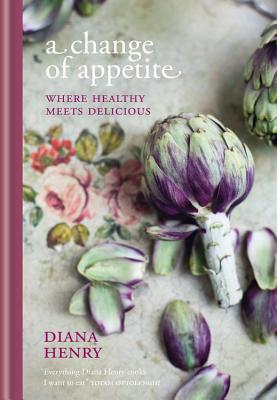 A Change of Appetite (Hardcover)

What happened when one of today's best-loved food writers had a change of appetite? Here are the dishes that Diana Henry created when she started to crave a different kind of diet - less meat and heavy food, more vegetable-, fish-, and grain-based dishes - often inspired by the food of the Middle East and Far East, but also drawing on cuisines from Georgia to Scandinavia.

In her year of good eating, Diana lost weight, but this was about much more than weight loss - lead by taste, it was about discovering a healthier, fresher way of eating. From a Cambodian salad of shrimps, grapefruit, toasted coconut, and mint or North African mackerel with cumin to blood orange and cardamom sorbet, the
magical dishes in this book are bursting with flavor, with goodness and with color. Peppering the recipes is Diana's inimitable writing on everything from the miracle of broth to the great carbohydrate debate. Above all, this is about opening up our palates to new possibilities. There is no austerity here, simply fabulous food that nourishes body and soul.

Diana Henry has won numerous awards for her journalism and books and is the food columnist for The Sunday Telegraph. A Bird in the Hand received a 2016 James Beard Award , and A Change of Appetite, voted Cookbook of the Year by the Guild of Food Writers in 2015, was a James Beard Award nominee. Diana was named "Cookery Writer of the Year" by The Guild of Food Writers in 2009 and in 2007 for her column in the Sunday Telegraph's Stella magazine. She is a contributor to many magazines including Eating Well, Red, House and Garden, Country Living and Waitrose Food Illustrated. Diana has written nine other books including Crazy Water Pickled Lemons, Cook Simple, Salt Sugar Smoke, and Roast Figs Sugar Snow. Her new book, Simple, publishes in September 2016. Diana lives in London with her partner and children.

Praise For A Change of Appetite…

Yotam Ottolenghi "Plenty More" and Diana Henry's "A Change of Appetite" indicate that British cooks may have surpassed us with their inventive flavor combinations and adoption of international ingredients.—Melissa Clark, The New York Times

Her book is full of bright ideas, as well as one of the most thoughtful directions ever written by a British chef for an American audience, appended to her recipe for salmon grilled in damp newspaper with dill and cucumber sauce. "Directions to use a broadsheet newspaper are because of size, not the content of the newspaper," she writes. "USA Today is a national newspaper that is the right size.
—New York Times Book Review

Filled with stunning meals that just happen to be healthier, this cookbook will delight epicures and foodies.
—Library Journal

I felt the book and I were destined to become true friends.
—Zester Daily

There is a taste here for everyone. Broken down by seasons, the book offers a nice mix of food from around the world.
—Publishers Weekly

A tome you can eat your way through all year long.
—
Houston Chronicle

If chicken is a
slab of marble, Henry is Michelangelo—Entertainment Weekly
or
Buy Here
Copyright © 2020 American Booksellers Association