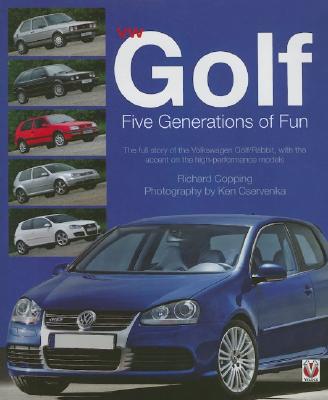 The combination of model history, coupled with hot hatch performance, all comprehensively illustrated through major photo shoots and detailed pictures, make this the complete guide to the five Golf generations. With all models, including Golf spin-offs, assessed, enthusiast-driving opinions shared and marketing policy discussed, this book is a unique hot Golfology!

With the best part of thirty VW titles to his name, ranging from Beetle books to Buses and Golfs, Richard Copping is regarded as a leading author and marque expert on matters Volkswagen in Britain and beyond. His credentials are impeccable, having learned to drive using a VW Beetle, he has owned Volkswagens ever since. A Concours judge, an avid collector of VW literature, and particularly so the oldest and rarest brochures, Richard has a monthly column in Volkswagen Camper and Commercial magazine, as well as regularly contributing features about some of the best VWs to be seen out and about.

If you aren't aware of just how good the Mk V versions of the VW Golf have been, you must be living under one very big rock. In fact, after going for a bit of a spin in one the other day, I almost had to trade in Mello such was the enjoyment the little four-banger gave me.

So then, if you're a VW fan, a former owner or just like a hatch or two, this is THE guide to everything Golf. Thankfully for us the focus of this book is predominantly on the high-performance models, including the R32 models.

There are plenty of high-color press and driving shots, and the wealth of information inclusive is simply staggering. Everything from Mk I-V is there, with an epilogue tying up loose ends, US specification and topless models. It really is a massively comprehensive guide.

Over 176 pages are there for the reading, and I almost had to wrangle this book with hot poker in hand off our resident VW nut here such was the state of her interest. Golf fan? You have to get this.


Autoist, April 2007
Publication of the Volkswagen Club of America (USA)

Picking up a copy of my quarter-century old book "Getting The Most From Your Rabbit" – especially if one were lucky enough to have the three updates done for it in '82, '83 and '84 in the pages of this magazine – one might be motivated to ask, "What happened after that?" As if in answer, Veloce Publishing, of merry old England, just sent me its new book, VW Golf – Five Generations of Fun.

The roughly 8-by-l0 firm-cover book is written by Richard Copping, with many of the photographs taken by Ken Cservenka. It's available at Amazon.com for about $23. You can check it out at www.veloce.co.uk (type "Golf" in the search box), where the publisher says: "The combination of model history, coupled to hot hatch performance, all comprehensively illustrated through major photo shoots and detail pictures, make this the complete guide to the five Golf generations. With all models, including Golf spin-offs, assessed, enthusiast-driving opinions shared and marketing policy discussed, this book is a unique hot Golfology!"

U.S. readers are going to be surprised at the publisher's use of color (colour, the Brits say) – on every page. It's packed with bright photographs that are sometimes dazzling, even under-hood shots coming alive in both factory photos and show shoots. While there is obviously a GTI emphasis, no UK model, even minor decorative series, is left out.

Of course, the book concentrates on the UK versions of the cars, but the rest of the world is not completely ignored: The author notes, for example, that in the United States, it was – and is now again – the Rabbit. In fact, American readers are going to find the most familiar territory in the last chapter.