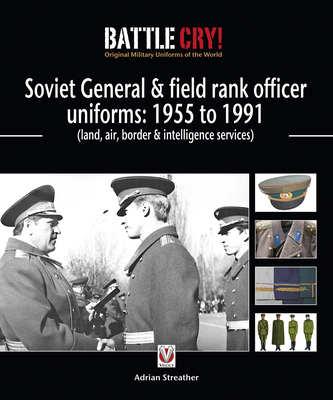 This book covers all uniforms issued and worn by the Marshal of the Soviet Union, Marshals, Generals and all field rank officers from 1955 to 1991. It features a well researched and illustrated history of each type of uniform, the period it was approved for and how it was made.  However, this book is not just about describing and showing pictures of Soviet officers’ uniforms. It contains a comprehensive collector’s and buyer’s guide, designed primarily to help enthusiasts identify what they might wish to purchase. It provides anecdotes of the author’s purchasing experiences, including the various traps awaiting the inexperienced uniform collectors. Its contents will help any student of the Soviet military identify uniforms properly, and hopefully distinguish an original from a reproduction.

If you have an interest in the uniforms of the USSR then this is a 'must-have'. I have not come across such a good book on this topic before and the publication is highly recommended. Those collectors of USSR uniforms will find that this book is a necessity and it could help them avoid being sold inaccurate uniform combinations." – militaryarchiveresearch.com

Adrian Graham Streather was born on December 25, 1958. Upon leaving school he joined the Royal Australian Air Force (RAAF) in 1975, where he trained as a Scientific Instrument Maker and gained additional qualifications in the electronics field. After a varied career in the aviation industry, he now lives in Australia with his family. Adrian is a prolific author, specialising in the Porsche marque, and has written a number of books that have been published by Veloce, including the Essential Companion series, and several in the Essential Buyer’s Guide series.