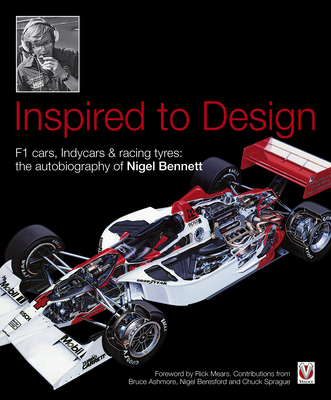 The differences between running an Indy car on a road circuit and an oval are covered, as is the struggle to get the best from a car for the Indy 500 - a task which is described with unusual clarity. Nigel also describes the story of the ‘Big Beast’ – the Mercedes pushrod engine that won the 1994 Indy 500.

Sharing in detail his own view of the importance of suspension geometry, and how it deviates from present practices, this book also includes personal views on the Penske years from a number of motor sport figures, and those of a rival Indy car designer Bruce Ashmore. A fascinating first-hand behind-the-scenes insight.

Included in the story is considerable detail of Nigel’s eight years spent with the Firestone European Racing Division, covering an area vital to racing car performance, plus the relationship between a tyre company and its leading contracted team. The 60s and 70s were rife with tyre wars, and many interesting stories unfolded during those decades. With descriptions of the importance of the Race Engineer to the driver, and to a team’s competitiveness, Nigel Bennett draws on his years of experience to offer detailed insight to how an engineer worked with a car and tuned its set-up in an era before computer readouts and telemetry came to dominate.

"This book provides a fascinating insight into that period of F1 development, and the role Lotus played in moving the goal posts a considerable distanceforward ... an interesting read and gives an insiders view of Lotus, Formula One and Champ cars - recommended." - Historic Lotus

"This is much more than just a dry ‘and then I did this' biog. Instead, you get a real feel for what it was like to be on the front line ... a cracking read." - Octane

"A brilliant account of what it's like to work in Formula One and the IndyCar series ... incredibly honest" - Auto Express

Nigel Bennett was one of Britain's most successful racing car designers of the 80s and 90s. His Indycars won 79 races, five National Drivers Championships, five Constructers Championships and five Indy 500 wins.He raced his home-built 750F car, and was Development Manager for the Firestone Racing Division, working with Team Lotus, Ferrari, BRM, Hesketh, Porsche and JW Automotive.He worked at Hesketh Racing before moving on to Team Lotus, and was engineer to Mario Andretti and Ronnie Peterson, becoming Chief Engineer to Colin Chapman. Designer of the Ensign F1 and Theodore Indy cars, Nigel was head-hunted by Lola Cars, later becoming Penske Cars' Chief Designer, a position he held for eight years.
Loading...
or
Not Currently Available for Direct Purchase