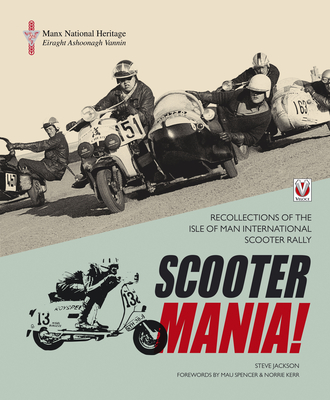 Recollections of the Isle of Man International Scooter Rally

Scooter Mania! is a year-on-year account of the Isle of Man International Scooter Rally, the brainchild of WWI veteran-turned-politician, James Mylchreest Cain.

Following a fact-finding mission to Dusseldorf, accompanied by Peter Agg from Lambretta, the second Rally went International for 1958, and was to grow in popularity throughout the 1960s, attracting competitors from countries as far and wide as Australia, USA, Rhodesia, Germany, Italy, Sweden, Poland, Czechoslovakia and India.

In addition to gymkhana and endurance events, closed-road and circuit racing attracted fast men such as Neville Frost, John and Norman Ronald, Ray Kemp, Andy Smith, and Norrie Kerr.  In 1971, the then chairman of the Tourist Board, Bill Quayle, declared that the annual Scooterist week was “the most important cog in the mosaic of Manx tourism.”

The author’s access to personal photographic archives, and Manx Press pictures, combined with period reports and interviews with competitors, builds a unique reconstruction of a hugely successful event on the scootering sporting calendar: an event that was to endure for 20 years and attract thousands of spectators.

Praise For Scooter Mania!: Recollections of the Isle of Man International Scooter Rally…

"makes for interesting reading for any scooter owner, old or new." -VE-UK

Steve Jackson bought his first Scooter at the age of 17, and attended his first Scooter Rally, at Morecambe, in 1984. A nomadic lifestyle followed, including memberships of Scooter Clubs in Birmingham, London and Devon, attending National Rallies, and sleeping in leaking tents. His interests later veered towards classic cars and motorbikes, but he never really got over his first passion.After several years of studying and working in Scotland, in 2010 he was appointed as a Library and Archives Assistant at the Manx Museum, in Douglas,  providing the inspiration for this project. The acquisition of a new Vespa PX 150 soon followed!
Loading...
or
Not Currently Available for Direct Purchase