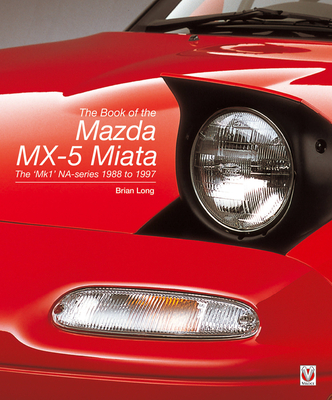 The Book of the Mazda MX-5 Miata

Researched and written in Japan, with the full co-operation of the factory, here, in definitive detail, is the complete story of the first generation of Mazda's MX-5 - the car that re-invented the affordable lightweight roadster, a species that many thought was extinct as the 1990s drew near.

Immediately successful, the MX-5, also known as the Miata or Eunos Roadster, spawned many imitators, but remains the world's biggest selling sports car. The series has now been in production for well over 20 years, and new generations continue to follow the concept of the original, much to the delight of fans and enthusiasts all over the world.

"BOOK OF THE WEEK ... reveals the subtle details in the design that pass many would-be owners by" - Classic Car Weekly

"this book is the definitive story of MX-5 Mk1 ... typically full of detail and very entertaining. I am a big admirer of Long's works on the Porsche 911 and this one is equally accomplished." - tkc (Totalkitcar)

"well researched and informative. There's much to like" - Octane (UK)

Born in Coventry, the heart of the British motor industry, Brian Long comes from a family with a proud heritage in the automotive and aviation fields. He trained as a mechanical engineer, and worked for a time at his father's garage. Brian became heavily involved in the classic car scene at 19, and says he turned to writing by accident. He has a long association with several major car manufacturers, is a member of the Society of Automotive Historians, and a member of the Guild of Motoring Writers. He now writes full-time and, since 1990, when his first book was released, he has had more than 80 titles published. Brian currently lives with his family in Chiba, in Japan, where they enjoy life with their Dobermann and Thoroughbred racehorse.

Takao Kijima is the Mazda Miata's Chief Engineer in Japan.