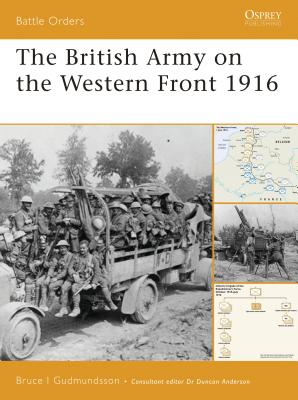 The British Army on the Western Front 1916 (Battle Orders)

Bruce Gudmundsson guides us expertly through the history of the successes and failures of the British Expeditionary Force in 1916 as it struggled to form into a modern army and turn the tide of the First World War, providing an in-depth analysis of how and why the BEF was converted from an antiquated unprofessional force into the army as we know it.

Examining the tactical innovations that accompanied this change, and the conflicting strategies and tactics that it was expected to pursue, Gudmundsson examines the difficulties facing the British Army, including the integration of the three separate armies that had been mobilized for the war. Also examined are the problems encountered with the bewildering number of new technologies in use, from novelties such as combat aircraft, tanks, armored cars to trench mortars, and more than a thousand pieces of siege artillery.

“Bruce Gudmundsson's The British Army on the Western Front 1916 is an excellent World War II survey which covers the tactical innovations that accompanied the many new strategies developed on the fly by the British Army. Holdings strong in World War II events need this.” —The Bookwatch (December 2007)

“...enhanced by quality period photographs and superbly drawn maps and charts. Overall, an excellent addition to the series and one that with both enlighten and inform the reader.” —Scott Van Aken, modelingmadness.com (December 2007)

Major Bruce Gudmundsson, USMCR (Retired) is an historian who specializes in tactical innovation - the way that military organizations respond to radical change. The author of four major books and several hundred articles, he has taught at the Marine Corps Command and Staff College, the Royal Military Academy at Sandhurst, and Oxford University. The author lives in Bronxville, NY.
Loading...
or
Not Currently Available for Direct Purchase