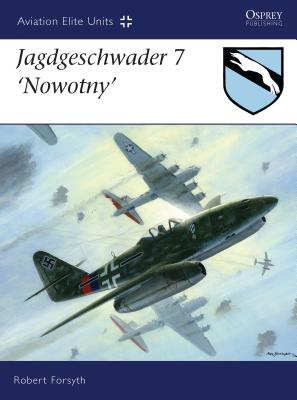 When the revolutionary Messerschmitt Me 262 jet fighter first appeared in the skies over northwest Europe in mid-1944, it represented the greatest challenge to Allied air superiority since the Battle of Britain. The first group to solely fly jet fighters, Jagdgeschwader 7 was formed out of the test unit Kommando Nowotny, and was tasked with taking back command of the skies. Put almost immediately into action, despite fuel shortages, poor training and problems with the jet engine, victories quickly followed against both US and British aircraft, including at least one Mosquito.

By the end of the war, the Jagdgeschwader had claimed nearly 200 enemy aircraft destroyed in daylight bomber raids during 1945. Fighter aces and those who became jet aces with JG 7 included Heinrich Ehrler (201 victories), Ernst-Wilhelm Reinert (174 victories) and Hans Waldmann (132 victories). This book follows the history of the revolutionary JG 7 unit, examining how their courage, determination and the most advanced aircraft in the world were simply not enough to ensure victory. In the final section of the book Robert Forsyth details how JG 7 eventually became ground down by losses, restricted operating conditions, lack of fuel and overwhelming Allied fighter strength, culminating in final surrender in May 1945, but not without scoring some of the final aerial victories of World War 2.

Jim Laurier is a native of New England and lives in New Hampshire. He attended Paier School of Art in Hamden, Connecticut, from 1974–78, and since graduating with Honours, he has been working professionally in the field of Fine Art and Illustration. He has been commissioned to paint for the US Air Force and has aviation paintings on permanent display at the Pentagon.

“Author Robert Forsyth has put together a superb book that covers the full story of this jet unit, from its beginnings until the end of the war ... another superlative publication from a publisher we have come to trust for accuracy and a good read...” —Scott Van Aken, modelingmadness.com (October 2008)

“A good read for the enthusiast and a good reference for the modeller.” —Rob Baumgartner, Hyperscale.com (February 2010)