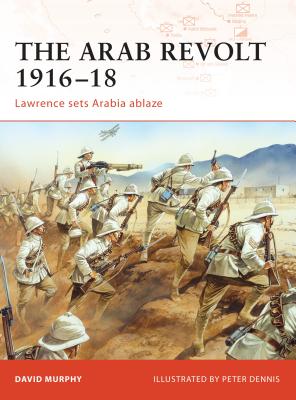 The Arab Revolt of 1916-18 was one of the most dramatic events of World War I (1914-1918). It resulted in the birth of the modern Middle East and also created one of the most enduring myths of the war, the story of "Lawrence of Arabia". In fact, it could be argued that the wider importance of the Arab Revolt has been forgotten in the rush to focus on Lawrence myth and that later generations have lost sight of the immense changes that this rebellion represented in Arab affairs.

This book examines the revolt without this prejudice, describing and analyzing the background and events of the revolt. Breaking the process into several broad phases, the author examines the initial capture of coastal towns like Jeddah, which secured and this allowed for the re-supply and support of the Arab Army by the Royal Navy. Then, the main focus of the revolt became the Hijaz Railway. The raids on this vital route are described in detail, as is the seizure of Aqaba in 1917 and the northward push of the Arab Army at Gaza, Jerusalem, Megiddo and Damascas. Finally, this book describes how a local Arab rebellion grew to form a major part of Allied operations in the Middle East, as Arab tribesman developed from being troublesome raiders into a force which could oppose brigade-sized Turkish columns by 1918.

Peter Dennis was born in 1950. Inspired by contemporary magazines such as Look and Learn he studied illustration at Liverpool Art College. Peter has since contributed to hundreds of books, predominantly on historical subjects, including many Osprey titles. A keen wargamer and modelmaker, he is based in Nottinghamshire, UK.

“Murphy provides an excellent narrative of how the British and French supplanted the Ottoman Turks as the rulers of the Middle East (and how this caused a large rift between the Arabs and the British and French once the Arabs realized what was going on). He also shows how some the most influential Arab players in the Middle East came to be so important -- many were involved in the Arab Revolt -- families such as the Husseins (Syria) and the Sauds (this is provided in a section entitled 'Legacy of the Arab Revolt' which is divided into parts about Palestine, Jordan, Syria, Iraq, and the Hejaz (mainly Saudi Arabia). Finally, Murphy discusses the fate of the most famous man from the Revolt -- Lawrence of Arabia -- it is quite a sad story. This book is an excellent resource for any person interested in the Arab Revolt in World War I.” —Jeff Grim, www.collectedmiscellany.com
or
Not Currently Available for Direct Purchase
Copyright © 2020 American Booksellers Association