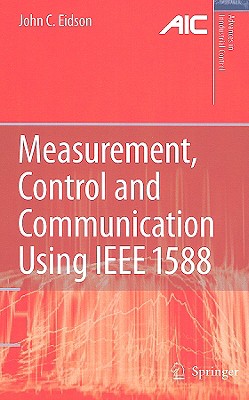 A common sense of time among all the elements of a distributed measurement and control system allows the use of new techniques for the solution of problems with complex synchronization requirements or arising from the interaction of many sensors and actuators. Such a common sense of time may be accomplished using IEEE Standard for a Precision Clock Synchronization Protocol for Networked Measurement and Control Systems (IEEE 1588-2002) to synchronize real-time clocks incorporated within each component of the system.

IEEE 1588, published in November 2002, is a technology new to the engineering community expanding the performance capabilities of Ethernet networks so that they become relevant for measurement and control; this monograph embodies the first unified treatment of the associated technology, standards and applications. Readers unfamiliar with IEEE 1588 will gain understanding of the context of the technology it represents and, from three chapters of case studies, its role in a variety of application settings.

To engineers implementing synchronization within their systems Measurement, Control, and Communication Using IEEE 1588 provides detailed discussion of the complex features of the standard. Together with the essential material on best practice and critical implementation issues, these provide invaluable assistance in the design of new applications.

John Eidson received a BS and MS in 1958 and 1960 from Michigan State University and the Ph.D. in 1964 from Stanford University, all in electrical engineering. Since 1970 his research has focused on instrument system design and architecture. This work was conducted in the central research laboratories of Varian Associates (1967-72), Hewlett-Packard (1972-1999) and most recently Agilent Technologies. Since 1990 his research has focused on the problems of distributed measurement and control with particular emphasis on the use of synchronized clocks and explicit representation of system timing as the foundation for instrument system architecture. This work has resulted in numerous publications and more than twenty patents. This work is the basis for the technology embodied in IEEE 1588.
or support indie stores by buying on
Copyright © 2020 American Booksellers Association