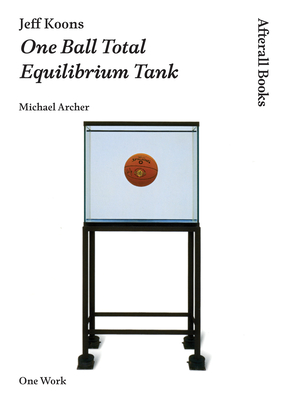 An examination of a work that captures the spirit of the 1980s—commodification, seduction, and political inactivity.

In Jeff Koons's One Ball Total Equilibrium Tank (1985), a Spalding basketball floats in the center of a glass tank that stands on a four-legged black metal structure. It has been called one of the defining works of the 1980s—but also described (by such critics as Craig Owens, Rosalind Krauss, and Hal Foster) as “an endgame,” “misleading,” and “repulsive.” The work presents what the artist called “the ultimate state of being”—neither death nor life but the absence of change. It captured a spirit of the time, characterized by commodification, seduction, and political inactivity. Its stillness embodied the opposite of social revolution. But the “total equilibrium” of the work is actually temporary. For purely physical reasons, the equilibrium is lost every six months and must be reset.

In this extended essay on Koons's famous work, Michael Archer puts One Ball Total Equilibrium Tank in an art historical framework, describing its initial exhibition at International With Monument in New York and related issues of media, commercialism, and class. He discusses the wider context of the 1980s art world, in which a renewed attention to painting practices met the legacy of Pop and appropriation art—setting the stage for the negative critical reception Koons's artwork first received. Archer goes on to consider sport as celebrity-maker and industry; the physical science of equilibrium; and the implications of the fact that the equilibrium of One Ball Total Equilibrium Tank is indeed total—but temporary.

Michael Archer is an art critic and Reader in Fine Art at Goldsmiths, University of London. The author of Art Since 1960, he has published essays on contemporary art in Artforum, Parkett, Art Monthly, and other journals.
Loading...
or
Not Currently Available for Direct Purchase