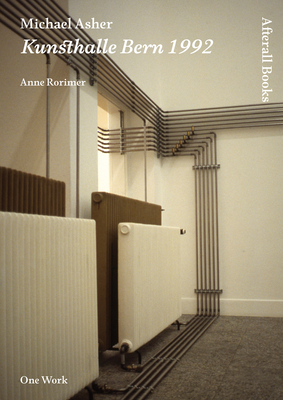 An examination of a major 1992 installation by a pioneer of site-specific experimentation.

Michael Asher (born in 1943), one of the foremost installation artists of the Conceptual art period, is a founder of site-specific practice. Considered a progenitor of institutional critique, he spearheaded the creation of artworks imbued with a self-conscious awareness of their dependence on the conditions of their exhibition context.

In the work Kunsthalle Bern 1992, Asher removed the radiators from all the museum's exhibition spaces and reassembled them in its entryway gallery. Metal pipes connected the relocated radiators to their original sockets; these tubular conduits, coursing in linear fashion along the Kunsthalle's walls, kept the steam heat flowing and endowed the installation with directional lines of force. This “displacement of givens” offers a perfect example of site-specific practice, one that took the gallery space and the institution itself as its subject. In this detailed examination of Kunsthalle Bern 1992, Anne Rorimer considers the work in the context of Asher's ongoing desire to fuse art with the material, economic, and social conditions of institutional presentation.

Rorimer analyzes Kunsthalle Bern 1992 in relation to the earlier innovations of such minimalist artists as Donald Judd, Carl Andre, Robert Morris, Sol LeWitt, Bruce Nauman, and Dan Flavin as well as to such conceptualist contemporaries as Daniel Buren, Dan Graham, and Maria Nordman. She also considers the installation in the context of other works by Asher that have used non-art, functional elements, including walls, or that have investigated museological issues.

Anne Rorimer, an independent scholar and curator, is the author of New Art in the 60s and 70s: Redefining Reality.
Loading...
or
Not Currently Available for Direct Purchase