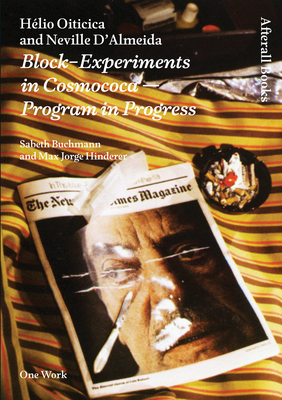 An illustrated study that casts a new light on Oiticica's most important work of “quasi-cinema” on its fortieth anniversary.

Hélio Oiticica (1937–1980) occupies a central position in the Latin American avant-garde of the postwar era. Associated with the Rio de Janeiro-based neo-concretist movement at the beginning of his career, Oiticica moved from object production to the creation of chromatically opulent and sensually engulfing large-scale installations or wearable garments. Building on the idea for a film by Brazilian underground filmmaker Neville D'Almeida, Oiticica developed the concept for Block-Experiments in Cosmococa—Program in Progress (1973–1974) as an “open program”: a series of nine proposals for environments, each consisting of slide projections, soundtracks, leisure facilities, drawings (with cocaine used as pigment), and instructions for visitors. It is the epitome of what the artist called his “quasi-cinema” work—his most controversial production, and perhaps his most direct effort to merge art and life. Presented publicly for the first time in 1992, these works have been included in major international exhibitions in Los Angeles, Chicago, London, and New York.

Drawing on unpublished primary sources, letters, and writings by Oiticica himself, this illustrated examination of Oiticica's work considers the vast catalog of theoretical references the artist's work relies on, from anticolonial materialism to French phenomenology and postmodern media theory to the work of Jean-Luc Godard, Andy Warhol, and Brazilian avant-garde filmmakers. It discusses Oiticica's work in relation to the diaspora of Brazilian intellectuals during the military dictatorship, the politics of media circulation, the commercialization of New York's queer underground, the explicit use of cocaine as means of production, and possible future reappraisals of Oiticica's work.

Sabeth Buchmann, an art historian and critic, is Professor of Modern and Postmodern Art and Head of the Institute for Art Theory and Cultural Studies at the Academy of Fine Arts Vienna.